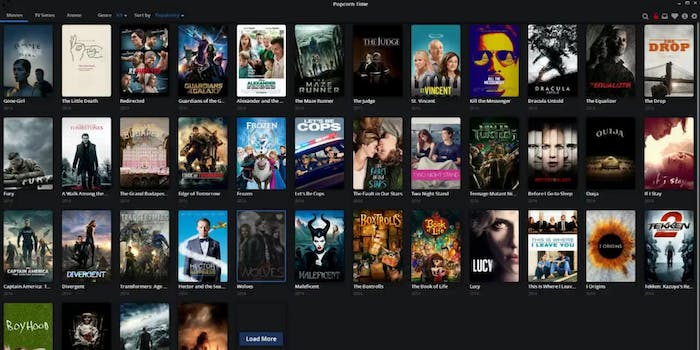 And why Netflix is terrified.

As far as pseudo-piracy programs go, Popcorn Time is a really nice one. It has a great interface, excellent quality, up-to-date movies and shows, and has somehow integrated steaming into torrent technology in a way that actually works, which is shocking to anybody who’s ever tried to hit “preview” on a downloading torrent (not that I ever have). It also comes with a built-in VPN service, which is always nice when you’re trying to not get fined or arrested for stealing media.

In short, the Argentine-made service takes the Web’s sweltering jungle of questionable torrents and essentially creates a user-friendly platform for them. It also just made Netflix and Apple extremely nervous.

To be fair, it’s been making Netflix pretty angry for a while now (about a year), with the streaming giant’s latest letter to shareholders even mentioning the program by name:

“Piracy continues to be one of our biggest competitors. This graph of Popcorn Time’s sharp rise relative to Netflix and HBO in the Netherlands, for example, is sobering.”

The graph being referred to is this one, and “sobering” is probably too kind of a word: 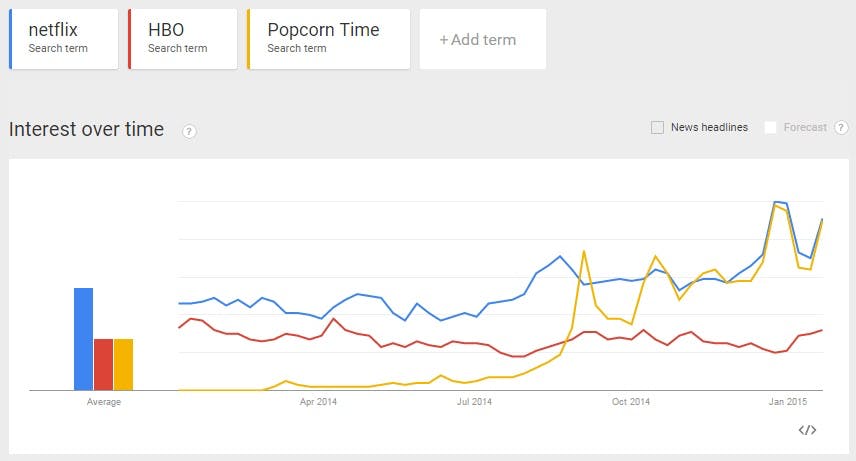 That’s a lot of yellow.

According to a September article from TorrentFreak, Popcorn Time had been installed on 1.4 million devices in the U.S., where there were roughly 100,000 active users, with 15,000 new downloads occurring every day.

The Netherlands trailed only slightly behind, with 1.3 million installations, but when you consider the population there is only 17 million, that’s a pretty intimidating number: It means that 7.6 percent of the country has installed the program, which is only slightly less than the entirety of its left-handed population. And when you consider the Netherlands only has about 700,000 Netflix subscribers—almost half the users of Popcorn Time—you can see why Netflix might be a tad concerned about this rogue “we don’t need no stinkin’ money” piracy program.

Plus: Those numbers are seven months old, so they’re certainly much higher now. And with the mobile apps now hitting the (literally) free market, they’re probably on the verge of skyrocketing.

And speaking of mobile apps: Netflix isn’t the only company with reasons to fear Popcorn Time. The developers have just released an iOS version of the program, and the app requires no jailbreaking (which always comes with the risk of just plain ol’ breaking) your iPhone. It’s added to phones via a desktop installer, which involves plugging your iPhone into your computer, opening the installer, and following some simple instructions.

Yes, that’s right: The installation process in no way includes the iTunes store, and Apple can’t be happy about that. As a matter of fact, it’s most likely going to wage total war on the developers of Popcorn Time, but it seems to be a fight that the developers are willing to get in the trenches for. As the team told The Next Web:

“The installer guys have no doubt that this will be a long journey, playing ‘cat and mouse’ with Apple. It probably won’t like them breaking its closed eco-system. But seeing their work now and the future updates for the installer they’re already working on, we’re sure they’re ready for any obstacle Apple will throw their way.”

So it looks like we may have a new Pirate Bay vs. the World situation on our hands, which is always exciting. With an Android app expected later this month, things can only be expected to get more heated.

H/T The Next Web | Screengrab via Computer Care Clinic/YouTube