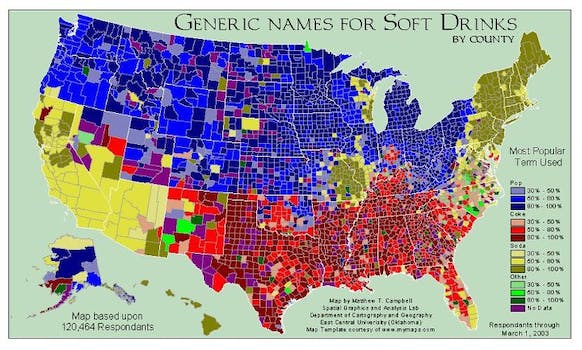 Pop vs soda—illustrating the debate

This U.S. map making the rounds on Facebook depicts the "generic names for soft drinks by county."

A map of America that addresses the age-old linguistic debate is making the rounds on Facebook: Do you refer to a sweet, fizzy drink as pop, soda or something else?

Never mind that the map is dated from 2003 and clearly marked as a student project from Matthew T. Campbell at East Central University in Oklahoma. It’s a springboard for people to sound off on what they call the drink, and everyone wants to weigh in. It’s been shared over 4,500 times and received more than 5,500 comments.

This surely isn’t the first time the photo has been passed around the Web, but this recent spike in popularity comes from a post Sunday on Walgreens’ uninspired Facebook page. Other recent posts include “Who likes Walgreens gift cards?” and “Like this post if a week from today, you’ll be watching the Super Bowl!”

The map’s broken down by county, and it’s based on self-reported answers given on a survey at PopVsSoda.com. That site has much more in-depth statistics, and among them are responses for those who answered “other” on the survey. Those responses include “soft drink,” “tonic,” “fizzy,” and “who cares.” 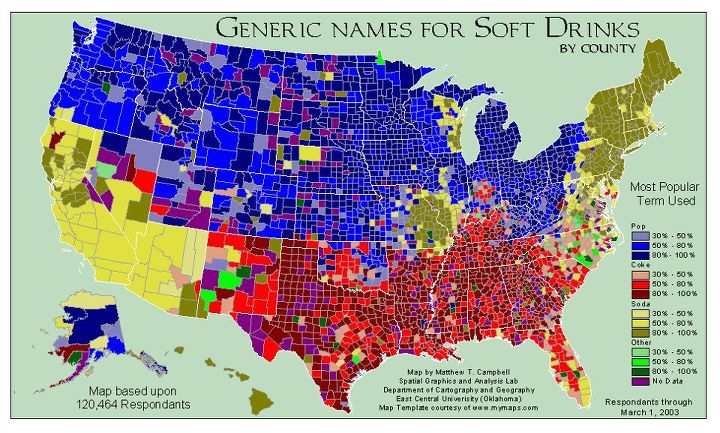