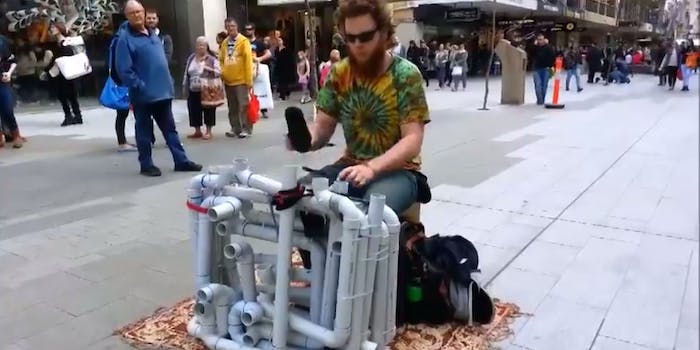 Success is not just a pipe dream.

A YouTube musician is getting a lot of attention—and not for a cover of Super Mario Bros. music, for once.

The “Pipe Guy” of Australia built a unique instrument out of nothing but PVC pipe, turning himself into something of a one-man Blue Man Group. And what does he play the instrument with? Why, his flip-flops, of course! (That’s “thongs” to native Aussies.)

A video of Pipe Guy’s performance in the Rundle Mall shopping center in South Australia is gaining traction on YouTube, currently standing at almost 61,000 views. As people gather around, snap photos, and even dance, he plays a mixture of original compositions as well as covers of Darude’s “Sandstorm” and Basement Jaxx’s “Where’s Your Head At.”

Hopefully, Pipe Guy’s continued exposure will allow him to play larger venues; we could see him doing well as the musical guest of honor at a plumbing professionals convention.