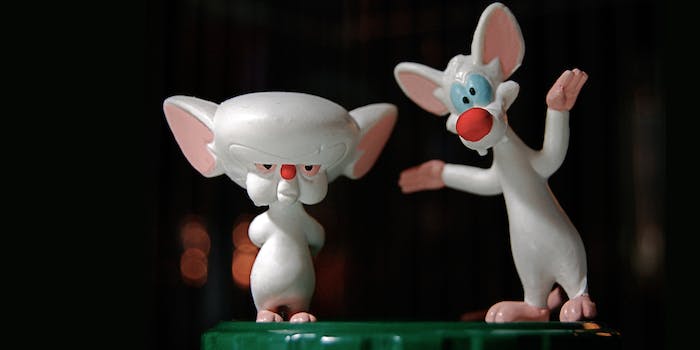 ‘Pinky and the Brain’ cast attempts to act out ‘Pulp Fiction’

"What do you want to do tonight?" "Same thing we do every night."

Maurice LaMarche and Rob Paulsen have shown that they were willing to take Pinky and the Brain into incredible uncharted territory, and if this clip from last year’s SF Sketchfest that’s just starting to go around is any indicator, they’ll even dive into the world of Quentin Tarantino.

Cole Stratton hosted the “An Afternoon with Pinky and the Brain” panel with LaMarche and Paulsen, and at one point, he presented them with a scene from Pulp Fiction. But because there are kids in the audience, they said they’d try to censor themselves as they read the parts of Jules and Vincent.

It’s a task in which they ultimately fail, but damn if it’s still not amusing to watch Pinky ask about hash and Quarter Pounders with Cheese as Brain explains it without his usual condescending tone. And it’s more productive than trying to take over the world.