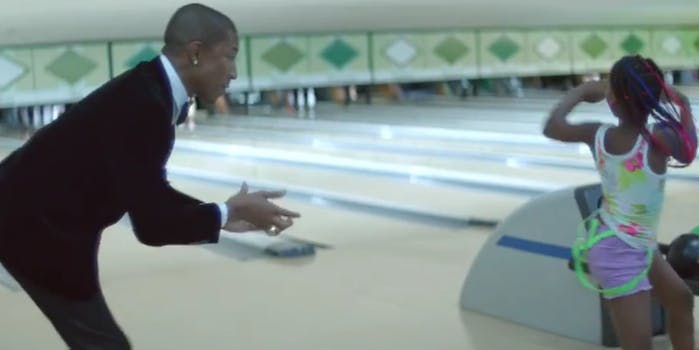 Williams knows how to write a hook, and "Happy" is no different.

The song “Happy” could have just been a single from Despicable Me 2, the animated sequel scored by musician/producer Pharrell Williams. Instead, he turned it into the first 24-hour music video.

If you’ve had an ambient awareness of Williams in 2013, it might be because he co-wrote two of the year’s biggest and most inescapable pop hits: “Get Lucky” and “Blurred Lines.” The man knows how to write a hook, and “Happy” is no different, but the soundtrack version of the song is completely recontextualized within the narrative confines of the video.

Williams collaborated with the Parisian duo We Are From L.A. to create the look and approach. Interaction with the video involves dialing around a digital clock, with noon, midnight, sunrise, and sunset as your guides. You can click on a specific time and see the performance from that moment, or to see Williams’ hourly takes, which are also marked on the clock. You can also comment on a particular scene, or share it on social media.

Some 400 people were cast to fill 24 hours worth of scenes across Los Angeles, including recognizable faces like Jimmy Kimmel and Despicable Me‘s Steve Carell, but Williams also asked for some diversity in casting: “We didn’t want to use models or caricatures. We wanted archetypes—people you’d walk past in a mall.”

There’s a straight four-minute version of the video on YouTube, but you’ll want to get into the guts of the interactive version.

Someone could, in theory, watch the entire 24-hour video in one sitting, but “Happy” works best in small doses. It’s an addictive song, but now you’re in control of just how much it gets stuck in your head.