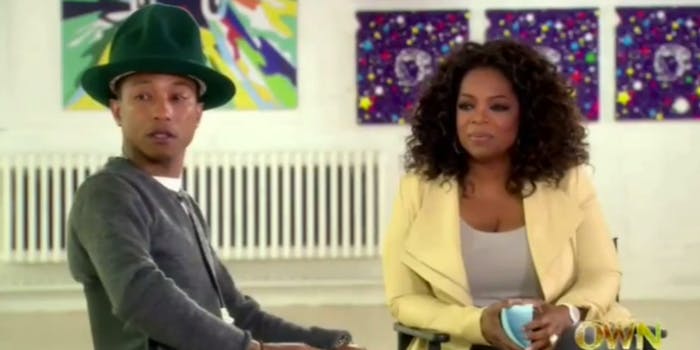 "Why am I crying on Oprah?"

If there’s one song that’s endured in the viral marketplace over the last six months, it’s Pharrell’s “Happy.” And if there’s one person who knows how to turn celebrities into sobbing messes, it’s Oprah.

Pharrell was a guest on Oprah’s OWN talk show, Oprah Prime, and the two spoke about the success of the song, as well as his childhood and his grandmother. With Pharrell and his Vivienne Westwood hat already emotionally primed, Oprah showed him a montage of fan-made “Happy” videos, documenting people across the world dancing to his song. Afterward, Pharrell tears up and can’t speak for about a minute.

Because when Oprah says, “Can we roll the tape of that,” your tears are going to be released from eye jail.