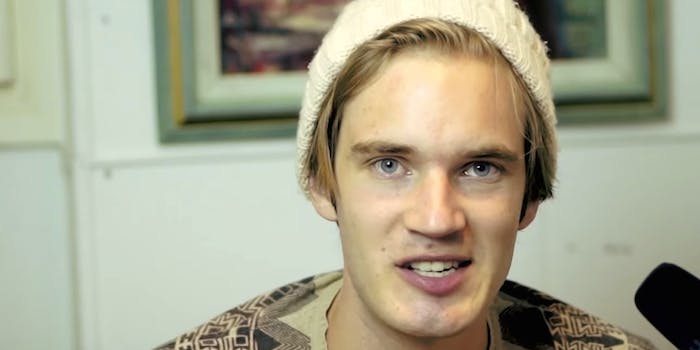 You don't get to 30 million subscribers without getting a bunch of spam comments.

Felix Kjellberg just got 30 million subscribers on his YouTube channel, and he’s celebrating by getting rid of what’s become the bane of his existence as a YouTuber.

The Swedish video game commentator, who goes by PewDiePie, has vented about the site’s commenting system before, and with many of his videos being watched millions of times, they’re full of the kinds of comments that give YouTube a terrible reputation. Despite any promises from YouTube about fixing the system, they’re still as terrible as ever.

Unlike the many women who constantly have to police (or disable) their comments for misogynistic retorts and threats, Kjellberg’s main problem is spam. He spends a good chunk of his time going through the spam that appears on his videos almost daily, but he took a break from YouTube and social media while he went on a vacation because he wanted to make “sure it was a full holiday.” When he came back to his channel, he was met with so much of the spam he tries to keep off his channel that he couldn’t even find legitimate comments.

“I go to the comments, and it’s mainly spam, it’s people self-advertising, people that are trying to provoke, people who reply to all these… just all this stuff that, to me, it doesn’t mean anything,” he said.

The spam got to be so much of a hinderance that he couldn’t even communicate with his fans.

He previously disabled his YouTube comments to protest the amount of spam in the comments, but this time, he said it’s for good. He contemplated letting fans donate to charity in order to comment and suggested possibly using Reddit or Twitter to interact with fans, but it seems that he’s still trying to figure out what to do next.

Still trying to figure out best way to go forward with the comments. So glad to see you bros support me with all this, really means a lot!