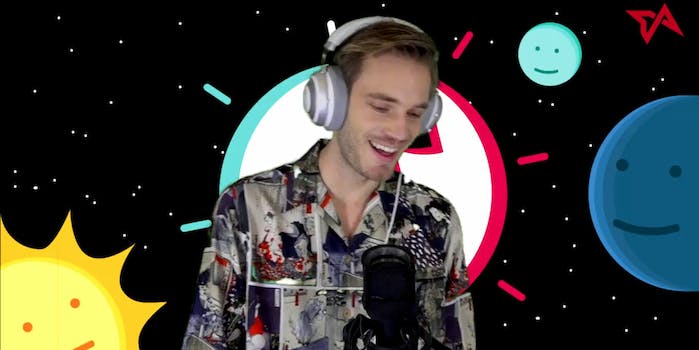 PewDiePie wants to save TikTok

He has some words for the 'Tikkers.'

In his most recent video, PewDiePie broke down some of his favorite TikTok videos in a 13-minute long compilation. “TikToks! They’re still a thing, whether you like it or not,” the video begins. “Let’s just enjoy it while we still can until this meme dies like Vine.

“Oh my God, it just hit me,” he continues. “If TikTok gets shut down then all the Tikkers will come to YouTube. I can’t handle another Lele Pons, please. We must keep TikTok alive!”

The video is classic PewDiePie. He watches a series of amusing TikToks and reacts for his fans, joking along with the Tikkers and occasionally criticizing their content. “It’s OK because you film it for TikTok … It’s OK to be an asshole as long as you film it for public ridicule online,” he says, following a video of a kid turning off his sibling’s Xbox One at the very end of a Fortnite match.

“I’ve said it before and I’ll say it again. I’m impressed TikTok,” PewDiePie says, moments before retracting the compliment… after a Tikker sticks his hand in a mousetrap: “I take back anything good I have ever said about TikTok. You ruined it.”

TikTok has risen in popularity in the last several months. Last year, the social streaming app managed to gain more than 30 million users between August and late October. TikTok’s reasonably large user base can’t compete with social media giants like Facebook and Twitter, but it is certainly a force to be reckoned with. A new version of Vine, called Byte, launches later this year—but it’s unlikely to eat into TikTok’s userbase.