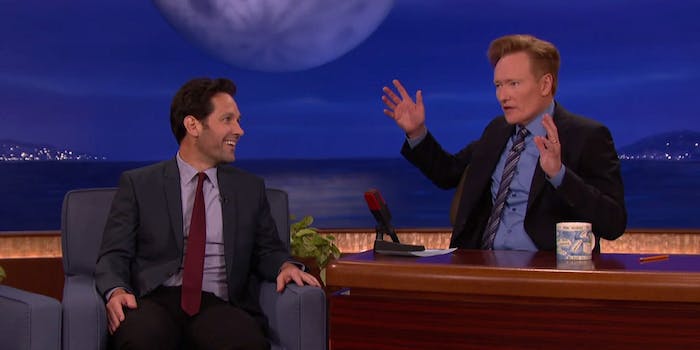 'Mac and Me' is now part of the Marvel Cinematic Universe.

Paul Rudd has been “Ruddrolling” Conan O’Brien for years, but Conan thought he finally had the upper hand in this modern-day version of the Peanuts football gag when Rudd showed up to promote Ant-Man.

Rudd could pull off his usual schtick—airing a clip of the 1988 film Mac and Me instead of whatever movie he had to promote—with a lot of major studios, but this is Marvel Studios we’re talking about. With a rigid press tour and the ongoing joke about “Marvel snipers” watching for spoilers, we could easily see the Disney studio putting an end to Rudd’s ongoing joke and making him actually show the clip.

That’s what O’Brien was hoping. He would finally get to kick that ball, or in this case, watch that clip. And even Rudd admitted that he had to show the clip. But did Rudd secretly have a trick up his sleeve to please Marvel and pull away that football?

Spoiler: Yes, yes he did.