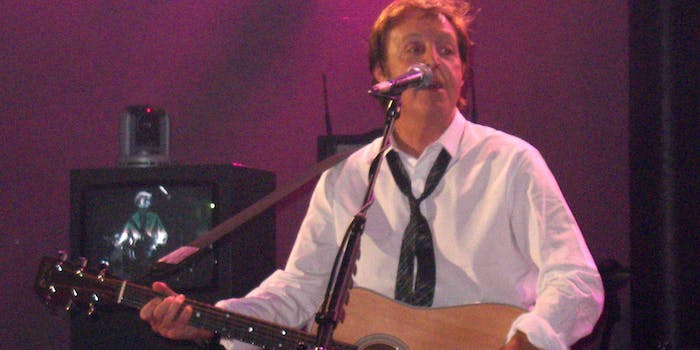 Despite the sketchy writing credit, Macca had everything to do with the hip-hop anthem.

How much time you spent at the mall?

How many runners do you got on call?

Swish, swish—how much did Paul McCartney actually have to do with Kanye West‘s charting-in-13-countries hip-hop smash, “All Day”?

Sure, the writing credits have more names than the Declaration of Independence. McCartney’s on there, too, but most thought that was just because he’s historically excellent at paperwork.

Turns out it was McCartney shopping for winter in May. He wrote the chords to the track in 1970 after the birth of his second son, while waiting in the hospital and getting inspiration from a nearby Picasso print. That became B-side “While the Wind Is Blowing,” and 29 years later in an interview, he explained the process and whistled the melody that would eventually become the winter-fresh cut of 2015.

“There was this Picasso print on the wall of an old man playing a guitar. I looked at it all week and towards the end of the week I thought what chords he playing? I’m a guitar player, what is he playing? I noticed he had two fingers here. So I thought I’d try and see what the chord is, and if it sounds any good. Ooh that’s nice. So then I tried to use that as inspiration, and tried to write a song that only used two fingers.”

No word yet on whether Macca helped West write any of the lyrics, though the safe money says he most definitely penned this advanced couplet: “Stupid n***a gettin’ money, Forrest Gump right now / Shoutout to Jackie Chan, I need to stunt right now.”