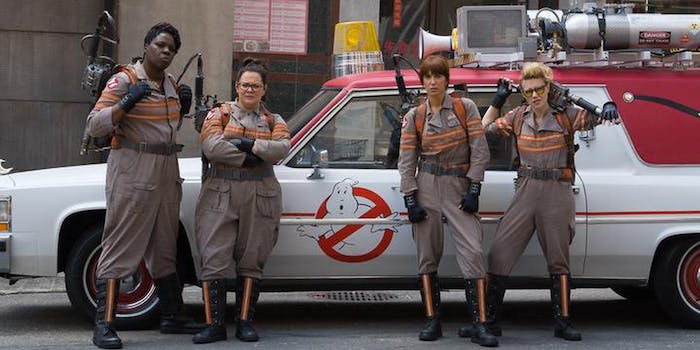 The car, the packs, the boots: They're all there.

There’s been a lot of very civil debate over Paul Feig’s upcoming reboot of the Ghostbusters franchise, and the fact it features an all-female team of Ghostbusters. The Internet has heard the idea, digested the idea, and discussed it with the utmost class.

Well, OK: The discussion around the movie has been an utter shitstorm since the day it was announced, but now we have an image that we can all look at to determine the Big Question: Have Feig and company gotten the tone right? Today, Feig tweeted the first official look at the new cast, standing in front of the car and appearing to be posing in-character:

Let’s do a rundown: The uniforms are solid—beige, understated jumpsuits—the car is a Cadillac hearse that appears to have been modified with a very tight budget, the proton packs are a steampunk joy that look like something you’d want a replica of hanging on your wall, and, most importantly: The jumpsuits are indeed tucked into the team members’ boots (yup—that’s been a major concern of fans looking at the leaked set pics).

The controversy and knee-jerk, nostalgia-triggered anger aside, will this be a good movie? It’ll be a year until we get that answer, but it’s tough to argue that, at the very least, this is pretty damn cool photo, and a great look for the team.

If the movie is half as cool as its aesthetics have been proving, there will be a lot of sighs of relief (and recanting of opinions) when the film is released next year on July 22.