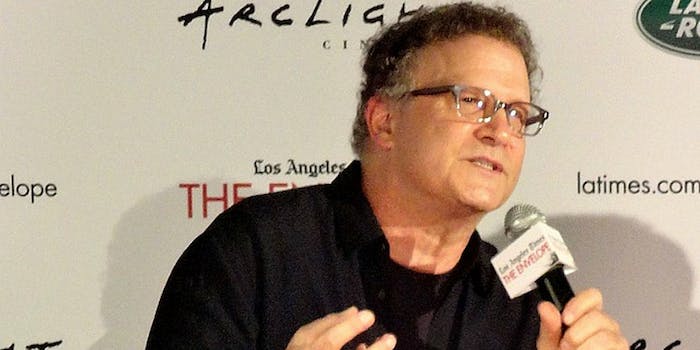 Ever have a bad day in which you piss off one of your heroes, and the whole thing has to play out on social media before the entire world? If so, you know exactly how comedian Patton Oswalt feels right now.

That’s because Oswalt, one of the world’s most-respected (and funniest) comics working today, was announced by Esquire magazine as the dean of the Famous School For Comedians for the 2015-16 academic year.

The problem there—and the problem that seemed to highly offend legendary comedian Albert Brooks—is that Brooks concocted the idea of the faux Famous School For Comedians for the magazine in 1971.

Anyway, for the magazine Brooks created a five-page parody of the Famous Artists School, whose ubiquitous “Draw Me” ads filled the pages of every comic book, men’s magazine, and hobby publication of the day. The “Albert Brooks Famous School For Comedians” featured a typically smarmy Brooks welcoming hopeful students to his shady enterprise. The following pages offered a photographic tour of the “campus,” samples from “The Curriculum” — including a two-page Comedy Talent Test® — and Brooks’ “Komedy Korner®,” which “answers” vital student questions about comedy. (Note also the Register Mark, used extensively throughout the article to impart an air of transparently undeserved authenticity). There is also a “testimonial” from a former student, who unfortunately seems to have learned exactly the kind of broadly shameless humor the Famous School For Comedians teaches.

Back then, Brooks was a 23-year-old comedian practicing the art of “New Humor.” But that didn’t stop the magazine from reimagining the gag with Bob Odenkirk and David Cross in 2002 and now with Oswalt in 2015. Apparently, Brooks didn’t know anything about the new installment, and when he found out Tuesday, he was not pleased.

Did Esquire tell you I own this??@pattonoswalt: Proud to follow @AlbertBrooks as dean of @esquire's Famous School for Comedians!

..@pattonoswalt It was Albert Brooks Famous School for Comedians. I love how they just took it as theirs. Oh well.

Hey @esquire @pattonoswalt Remember this? How the fuck do you now own it? https://t.co/pDDJseW1BC

At first, it appeared as though Oswalt thought Brooks was joking, and he tweeted a line about how he heard that Odenkirk and Cross had won the position of dean from Brooks in a game of baccarat and that Oswalt had then won it from the duo in a game of beer pong (that tweet has since been deleted).

..@pattonoswalt @esquire Seriously. This was the origin. This was NEVER "Esquire's" Fucking illegal. https://t.co/rQ1GJM78sj

To clarify, @AlbertBrooks's 1971 "Famous School" is the original master work. We asked @PattonOswalt to riff: https://t.co/telN5GGCEI

Oswalt, meanwhile, addressed Brooks in a series of tweets in which he offered his heartfelt apologies.

Wrote Oswalt: “I was VERY aware of the Famous School for Comedians when I accepted Esquire’s offer. I’ve been a fan and near-acolyte of you since my teens. I knew, in 2002, that Esquire had done a SECOND “Famous School” feature. So I assumed (wrongly, sloppily) that doing a THIRD one was okay with you. But we have enough friends in common that I could have EASILY contacted you, so that’s on me. Albert, I’m sorry you and your work were treated this way. I go bugfuck when it’s done to me or another comedian, and now I’m in the shitty position of inadvertently dealing out theft to one of my heroes. This has been an IMAX, 3D, Smell-o-Vision version of a shitty day. I’ve pissed off one of my heroes. No excuse, no acceptable apology as far as I can see. Fuck me. Good night.”

In the end, though, it appeared that Brooks accepted Oswalt’s apology.

.@Pattonoswalt Let it be. I believe you didn't know what was what. @esquire has a weird idea of what a "tribute" is.

Thank you, Albert. I want to Hulk-run into your arms right now.

So, that’s that. Unless all of this fighting is really just a three-way work of art in which Brooks is making us all look like fools. And if so, there’s only action: he immediately should be reinstated as the dean of his Famous School For Comedians.