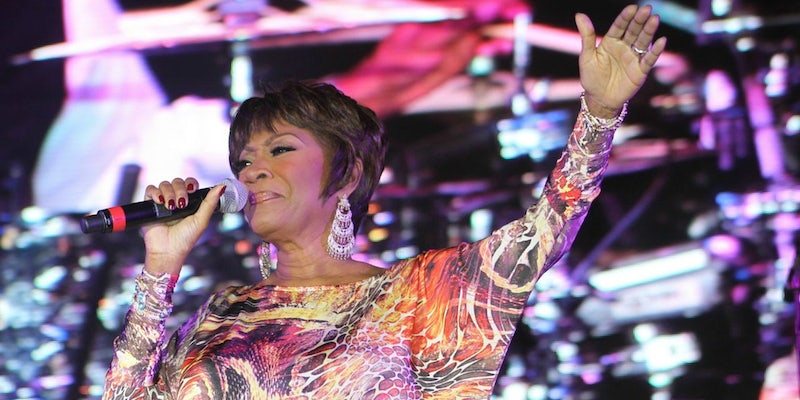 Patti LaBelle tells a stripping fan ‘I am not Nicki Minaj’

Do NOT mess with this 71-year-old singer.

Patti LaBelle is 71 years old, and when she’s not touring North America, the soul singer is trying to sell you barbecue sauce and marinades on her website. She looks and sounds like a sweet woman who can still belt out a tune or two.

But if you work up the nerve, invade the stage on which she’s performing, and begin to perform a striptease, LaBelle can turn nasty. Because, as she says in the video below, she’s not Nicki Minaj or Miley Cyrus, and if you suggestively show her your backside, she’s going to expel you from the building.

Take a look at the poor schnook who tested her patience last Friday in Vancouver.

LaBelle had already invited a few fans up to the stage to sing during her rendition of “Lady Marmalade.” But none of those people were stripping on stage. This guy, though, wanted to show LaBelle what he was made of—literally and figuratively.

LaBelle, who earlier during the incident had told her security that she could handle the intruder by herself, then threw a shoulder-block at him before her bodyguard accompanied the would-be-stripper to parts unknown.

Obviously, the dude could have taken a lesson from the Daily Dot’s Miles Klee in how not to take a physical or verbal beating if you crash somebody else’s stage (hint: have a modicum of singing talent).

Otherwise, Patti LaBelle is going to call you a “bitch” as you’re leaving her “goddarn stage.”