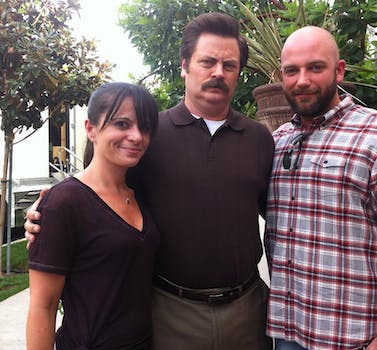 In NBC’s Parks and Recreation, Entertainment 720 was an “entertainment media conglomerate” known more for its big dreams rather than its big events.

The business tanked in season four because of poor management by founder Tom Haverford (played by Aziz Ansari) and Jean Ralphio (Ben Schwartz) and forced the duo to return to their day jobs in Pawnee, Ind.

Well from the looks of the show’s latest episode, the duo may be making comeback and Reddit user sweetlee was the first to know.

The show filmed part of the episode at sweetlee’s home, where she was able to meet the cast and crew, including Nick Offerman (who plays the mustachioed Ron Swanson).

“We live very close to the studio where a lot of NBC shows are filmed and they left a note on the mailboxes in our building one day saying they were scouting for a shooting location for Parks & Rec. We called and said we were interested, they came by and took pics and then a week later they started shooting!” sweetlee wrote. “The first shoot was last season and since Tom has a bigger storyline this season (our house is Tom’s apartment), they have been continuing to come back and shoot additional episodes. A couple weeks after this one, they came back and shot a 3rd one. No telling how many more there will be.”

Thursday’s episode of Parks ultimately left the future of Entertainment 720 uncertain, but if the photos of Haverford’s decadent bookshelf are any indication, the conglomerate may be back.