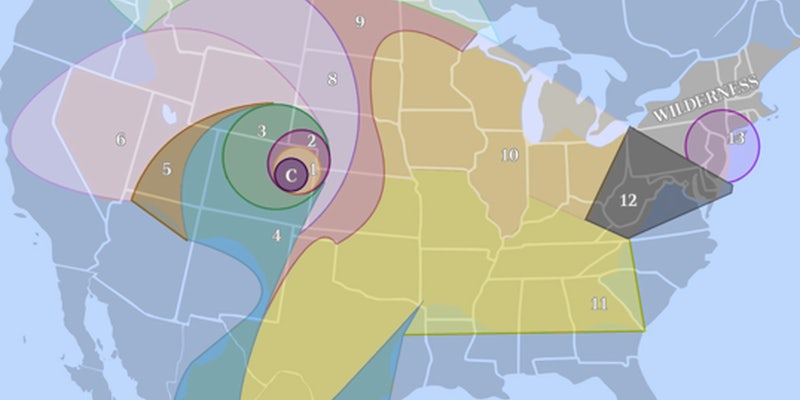 Mapping Panem from “The Hunger Games”

V. Arrow's detailed map for The Hunger Games on LiveJournal helped land her a publisher for her literary guide, The Panem Companion.

In The Hunger Games trilogy, things aren’t looking good for North America. After a flood took out most of our present day coastline, this dystopian future society, Panem, was divided into districts. For readers, half the fun is trying to figure out where each district would be today.

Since author Suzanne Collins hasn’t drawn a map of her own, it’s up to the fandom to figure it out. Livejournaler V. Arrow tried her hand at it, and her efforts landed her a book deal.

Arrow’s map, which organizes the districts in a phi spiral, is getting attention as one of the most well-researched maps of Panem yet. While it’s new to many Internet denizens, for Arrow, it’s a thing of the past. She and collaborator Meg (Livejournaler badguys) created the map nearly a year ago.

“I do think that Livejournal doesn’t necessarily lend itself to mainstream viral content—partially because there are no “share on Facebook/Twitter/+1” links included on LJ pages,” Arrow told the Daily Dot. “Although that’s actually a feature of LJ that I prefer more often than not!”

Last February, however, Arrow said the map still got a “fair amount of attention” within The Hunger Games fandom. Enough for publisher Smart Pop Books to give her a book deal. Her literary guide to the Hunger Games, The Panem Companion, will be released in Dec. 2012.

“When we were making the map, we definitely did not anticipate the kind of fervor within fandom—and now outside of it—that would lead to podcast guest appearances, write-up articles, and a book deal!” she said. “It’s also very exciting to get emails notifying me that our content is being cited as an academic source in various other authors’ scholarly work about the series, and I can only hope that if it’s ever crossed Ms. Collins’ path, she approves of it, too.”

Arrow said she’s tried to avoid reading viewer’s comments on her map but wants to assure fans with more knowledge of cartography that she has since revised the map for accuracy. Mostly, however, she said this revival of attention has been flattering.

“I definitely have enjoyed reading the articles posted on io9, The Mary Sue, Crushable.com, and others, and I can only hope for such a kind—and widespread—reception to the book this map spawned.”

Image from Aim My Arrows High