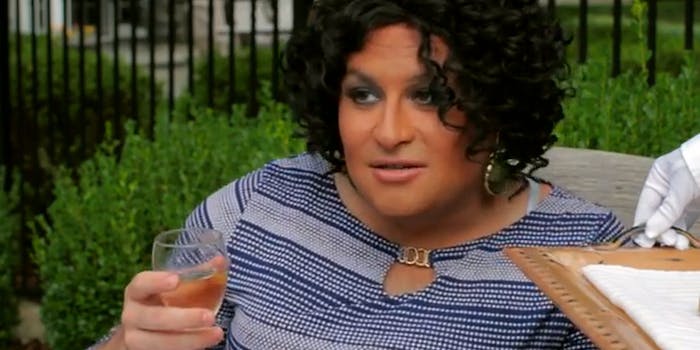 In the first episode of Eliot's Sketchpad, Comedian and blogger Eliot Glazer channels the media mogul as she discovers and tries to replicate some of the biggest YouTube viral videos.

Watch out, everyone. Oprah’s on the Internet.

In the first episode of Eliot’s Sketchpad, Comedian and blogger Eliot Glazer channels the media mogul as she discovers and tries to replicate some of the biggest YouTube viral videos.

Eliot’s Sketchpad is the newest web show for Above Average, which was launched by SNL creator Lorne Michaels last June. Here, Glazer combines his his love for drawing with writing and performing comedy sketches, which often “begins as a simple drawing, but turns into something much, much weirder.”

“I got the idea from watching [Oprah] try to get new viewers to her network,” Glazer, a fan of both Oprah and Gayle King, told the Daily Dot. “I love Oprah—I think she has a strange, unique way about her, and how she can vacillate so easily between talking about spiritual fulfillment and celebrities and luxury items.”

And Glazer certainly delivers. In his first sketch, he dresses in drag, puts on copious amounts of makeup and dons a wig to portray Oprah pandering for viewers because her television network, OWN (Oprah Winfrey Network), isn’t doing very well.

Glazer manages to hit Oprah’s cadences and her booming voice as he explains that Oprah, along with the help of her bff King (played by Naomi Ekperigin), are going to recreate classic viral videos they found so that more people will start watching Oprah’s channel (and let her back into their “heart space”).

No video (or meme) is left untouched. Oprah and King tackle planking, the Cola-Candy Explosion, Double Rainbow, Piano Dog and the Cinnamon Challenge, among others. Most of the video recreations involve Oprah shouting the name of the video as King demonstrates the task.

There’s even “Shit Oprah Says” with a nod to Oprah’s famous giveaways, and in the midst of her enthusiasm over participating in a flash mob, she pushes King into a pool.

“We did it!” Oprah shouts excitedly.

If Oprah and King actually did recreate other viral videos, Glazer has a couple in mind.

“I would love to see Oprah make Gayle go ‘milking,'” he said. “Or Oprah and Gayle recreating ‘Charlie Bit My Finger.’ I would KILL to see Oprah dressed as TRON MAN, though. I would kill for that.”