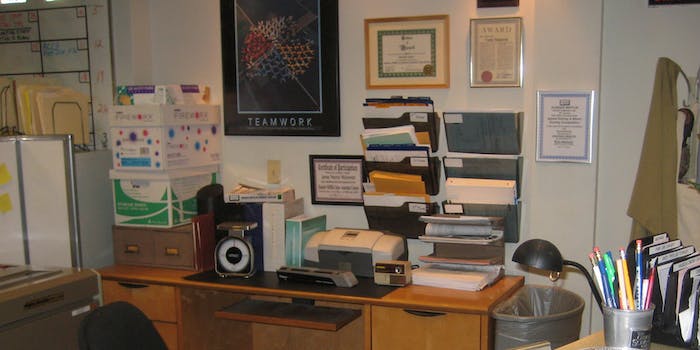 Travel through pop-culture history with ‘The Office’ time machine

Joe Sabia's digital project shows how reliant we are on cultural touchstones.

The belovedly relatable NBC sitcom The Office may have drawn to a close after a nine-season run. Yet for true fans, it never really ended. Just ask digital artist Joe Sabia, who over the course of 18 months catalogued the show’s 1,300 real-life references for an interactive (and highly addictive) video experience he calls The Office Time Machine.

Just enter the year whose pop culture you want a glimpse of and hit the “Go” button: 1994, for example, gets you Michael Scott imitating Disney’s The Lion King, Pam reminiscing about Old Navy, and Dwight name-checking the original Warcraft.

You can journey as far forward as the series went chronologically (2012), and as far back as the age of Moses, the pyramids, and, apparently, the world’s first “yo mama” joke. For any period earlier than 3500 B.C., however, you get a clip from Jurassic Park—not that I’m complaining.

Here’s 1971, though you’ll need to visit the site to play around with the time machine itself.

“The Office is relatable (and hilarious) because it borrows so much from culture, and people get the references,” wrote Sabia, who collaborated on the project with Aaron Rasmussen and Matt Werner. “Culture is society’s collected knowledge, art, and customs. It’s what surrounds us and unites us, and it allows us to collectively laugh at a joke in The Office about Ben Franklin or M. Night Shyamalan. Culture, simply put, is the seasoning in a meal.”

But Sabia’s not done yet: knowing full well that he has a few blind spots, he’s asking viewers to post suggested revisions and additions in a Google Doc. I helpfully informed him of Dwight’s sulky remark, in an episode when the office is evacuated for a fire, that his favorite movie is The Crow—a moment that would round out the 1994 montage nicely.

Honestly, though, after so much hopscotching through history, I have a newfound appreciation for the present.