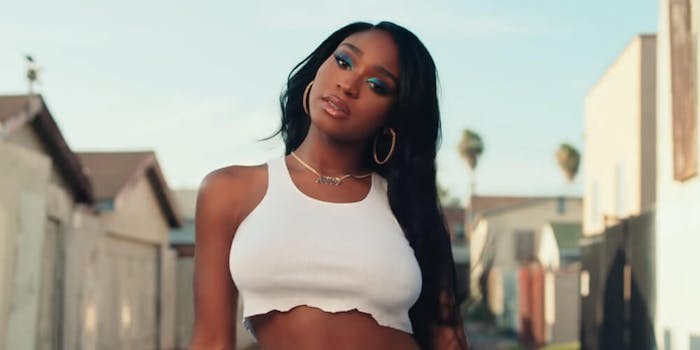 Hailey Bieber shut one down.

Normani has been slaying the Halloween game with her Naomi Campbell, Selena Quintanilla, and Cher costumes–racist trolls are coming for her after she posted the latter on Instagram.

While comments are overwhelmingly positive, some trolls are deciding to be racist.

In a screenshot grabbed by People, one Instagram user commented under Normani’s Cher picture saying:

“I don’t think this is the right costume for a black girl. Cher is white and Cher was thin, Cher did a lot you not even close to her you black people think you own everything not fair you could’ve done Beyoncé or Rihanna or Janet but no Cher Cher is white respect her.”

Aside from being racist, fatphobic, and point-blank wrong, the user tried to dampen what was clearly a young artist paying homage to someone who inspires her–on Halloween, no less.

And Hailey Bieber was not about to let anyone attack Normani on her holiday.

“There is absolutely nothing wrong with Normani dressing up as Cher for Halloween,” Bieber responded to the user. “What do you mean by the first sentence? She can do it because she wants to, she is doing much better than you, you’re behind a computer complaining about a costume. Stop being racist and get out of her page if you don’t like it. It’s 2019 and you’re still supporting the garbage of Trump.”

Normani has yet to respond to the criticism, but that’s probably because she’s too busy slaying the game.