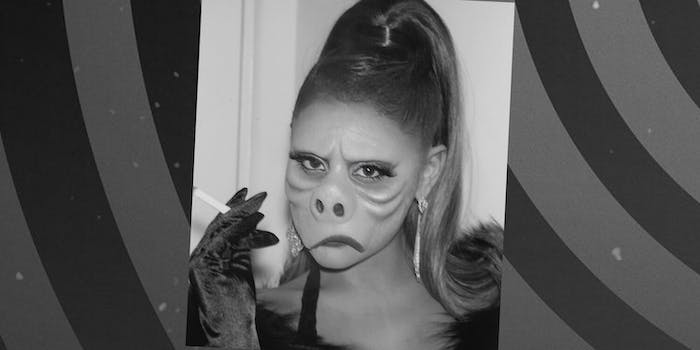 Ariana Grande has had some iffy ideas for Halloween costumes, but thankfully, she went a more tasteful route this year.

On Wednesday evening, the singer posted a video and photo of her Halloween costume: a character from The Twilight Zone‘s “Eye of the Beholder.” In the classic 1960 episode, a woman named Janet Tyler undergoes yet another surgery to transform her face to look “normal,” but it’s revealed the surgery failed and she is still conventionally beautiful in a world where the majority have pig-like noses and misshapen lips. And that’s made her an “outcast.”

eye of the beholder 👁 🖤 pic.twitter.com/5kDU0MBRwy

While some fans didn’t immediately get the reference, there were quite a few mentions of Piggy Smallz, Grande’s pet pig, as well as Grande’s iconic year-old response to her pet’s favorite tracks from Sweetener: “She is a pig.”

at the end of the day. she is a pig @arianagrande pic.twitter.com/pE3mvXYI9l

obsessed with the results tho pic.twitter.com/KgL9BgEQNo

And some people were just freaked out. Twitter user @onelovesbutera responsed, “I don’t know whether to focus on the serve or how scared I am.”

Grande apparently didn’t stop at a costume, either. She tweeted that she “can’t wait to keep my home disguised as the twilight zone for the rest of my life.”

i’m so incredibly pleased with my theme this year. and the decorations. can’t wait to keep my home disguised as the twilight zone for the rest of my life.