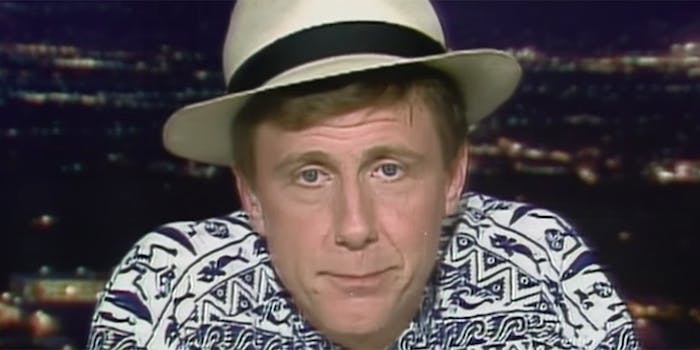 He was best known for playing Judge Harry Stone.

Formerly a magician, Anderson was nominated for three Emmy Awards for Night Court, on which he played a funny, genial judge. He also guest-starred on Cheers as Harry “the Hat” Gittes, co-starred in Dave’s World for four seasons, and starred in the 1990 ABC adaptation of Stephen King’s It.

Before acting, Anderson got his start as a street performer and worked his way up to a gig at Magic Castle in Los Angeles. With the exception of an appearance on 30 Rock, Anderson was largely distant from Hollywood in his later years and moved to North Carolina in 2006.

Aw man, I'm so sorry to hear this.

My condolences to his family, friends, fans and everyone who loved him.

Rest in peace, Harry the Hat, you were my friend. https://t.co/fv2yzW4sku

Other comedians also tweeted memories and messages for the actor.

I appeared on three episodes of "Night Court" way back when. Ran into him in N.Y. not that long ago. Always friendly. Always funny. RIP Harry Anderson

I loved Harry Anderson and “Night Court.” Rest in Peace.

RIP Harry Anderson. Night Court was a staple growing up & so were you.