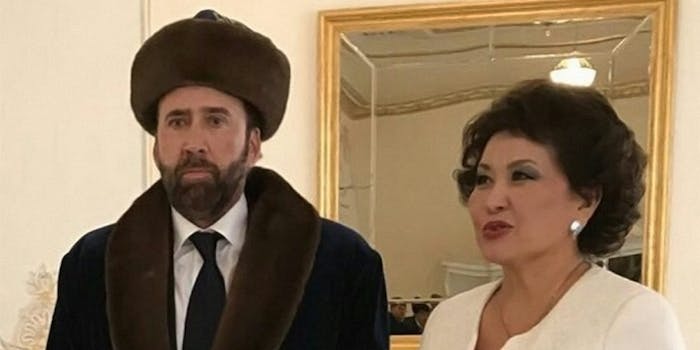 Blink once if you're OK, Nic.

Is Nicolas Cage preparing for a new role? Has he become an alien host? So many questions come to mind when looking at this photo of him in Kazakhstan.

Cage appeared in traditional attire over the weekend, posing next to musician Aiman Mussakhajayeva while attending the Eurasia International Film Festival. (Adrian Brody was also there.) At first, it appears to be a wax figure of Cage, but you can see something resembling human emotion in his eyes. The Cage Gaze.

In other news, Nicolas Cage is in Kazakhstan. pic.twitter.com/ceAk0ktgqy

Naturally, Cage’s lifeless form could be inserted into any pop-culture vessel.

Nicholas Cage looks like he's just heard 9 of the 10 activation words and is about to go full Winter Soldier. pic.twitter.com/liabS5MZJ1

At a festival press conference, Cage told reporters that he would be “pleased to participate in some film project on the territory of Kazakhstan,” like a normal human and not someone who is an alien host.