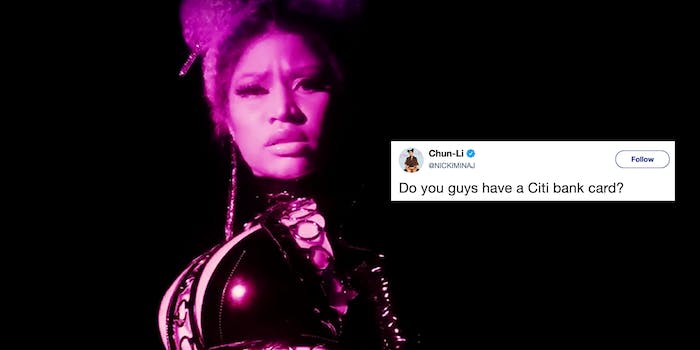 Nicki Minaj fans went into a frenzy Monday morning when the rapper asked on Twitter if anyone has a Citibank card. The rapper’s query began trending in the U.S.—the moment of seemingly earnest celebrity fun was viral marketing, after all—but the real-time backlash was so one-sided that she appeared to reconsider her business plan altogether.

Minaj, who recently teased an upcoming global arena tour, hinted that presale tickets will be available to Citi cardmembers, as part of the bank’s partnership with LiveNation. Dozens of U.S. artists have partnered with the program, including Beyoncé, Pitbull, and HAIM.

Do you guys have a Citi bank card?

Fans were alarmed when they saw Minaj’s tweet—many didn’t know why she was asking, while others who knew were upset to find out she’s selling presale tickets that way. Others were just excited to hear that the tour will be announced soon and pledged to do whatever was necessary to get ideal seats.

Hold on sis let me sign up for one pic.twitter.com/SGzF3aaeEA

Nicki I had 1 credit card empty for years and now you telling me I had the wrong card all alone pic.twitter.com/E3tFKl6xEB

NO! Where can I find one? Girl, why do you do this to us, oh God, I need one of these. pic.twitter.com/khDzvbz2Il

no but i got a food stamps card. what can i get for that? pic.twitter.com/J1gAStvPbN

Anything for you, Chun Li 💕💞 pic.twitter.com/ipwhmBpK0Q

@NICKIMINAJ OKAY NOW LISTEN ONIKA… I HAVE CHASE, CAPITAL ONE, CREDIT ONE AND APPLE PAY… YOU GOTTA MAKE ONE OF THESE WORK OR CATCH THE FADE pic.twitter.com/ReyMdnBmMd

Concerned tweets caught Minaj’s attention and she asked her fans if they really felt that a few days of the Citibank presale would actually affect their chances of getting tickets.

Pre-Sale is only a few days guys. You feel all the good seats will go by then? https://t.co/V3vbRnH3Be

When her question was met with a resounding yes, Minaj seemed to be re-thinking the presale. Fans begged her to release her new album first and announce the tour later, to give them more time to save up.

Minaj hasn’t made any concrete decisions about the presale, but it looks like fans can expect a tour announcement soon.