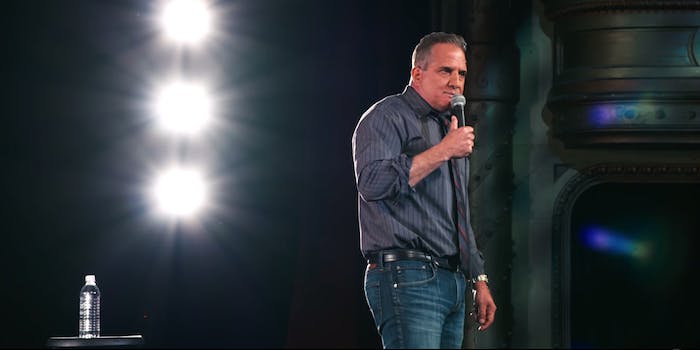 'Black Lives Matter was founded on a f*cking myth.'

The original promotional image for comedian Nick Di Paolo’s special showed him flipping off a group of people that Di Paolo would refer to as Social Justice Warriors. Among them is Muhiyidin Moye, a Black Lives Matter activist who was killed last year.

Di Paolo released the comedy special “A Breath of Fresh Air” on YouTube for free on May 6, boasting that the special was “labeled too ‘dangerous’ for Netflix and too ‘honest’ for Comedy Central.” The special’s promotion image soon ignited controversy for its depiction of Moye.

Moye gained internet fame as the protester in the viral clip of a man jumping over a police barricade to try and take a Confederate flag out of the demonstrator’s hands. The man holding the flag was at the College of Charleston to protest the university hosting activist Bree Newsome for a discussion on racial justice movements.

Protester jumps barricade and attempts to get Confederate flag from man #chsnews pic.twitter.com/hTBql8qS9Z

Moye died from gunshot wounds after he was attacked while riding his bike in New Orleans in February 2018.

Di Paolo said that his promo image was comprised of stock photo images and that he was unaware of Moye’s fate.

“Looking into changing it as we speak,” DiPaolo tweeted on Tuesday. “My apologies.”

I did not know that as I found it online in stock photos. Looking into changing it as we speak. My apologies. https://t.co/JK0qYMl93R

Since addressing the offense, Nick Di Paolo has gotten right back to promoting the special. On a trailer that features a bit where Di Paolo suggests Bernie Sanders could have won over the Black vote if he changed his first name to “Colonel,” Di Paolo tagged an eclectic list of Twitter users in hopes of catching their attention.

In a video response to the controversy, titled “Twitter Mob Meltdown,” Di Paolo states that “the only reason [he] apologized was for that guy’s family.”

“I can’t stand what [Moye] stood for,” Di Paolo says. “Black Lives Matter was founded on a fucking myth.”

Nick Di Paolo and Black Lives Matter did not immediately respond to the Daily Dot’s request for comment.