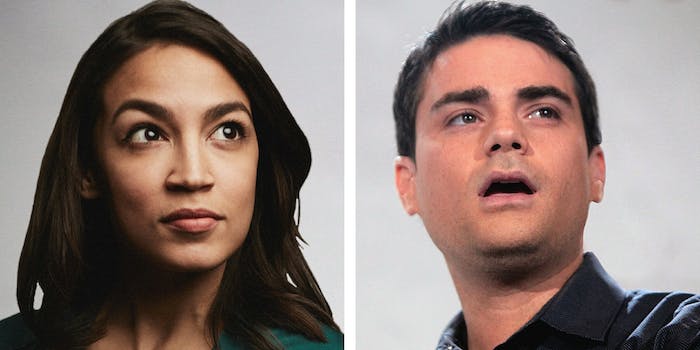 Conservative men try to talk to Ocasio-Cortez about menstruation

Last night, Georgia Gov. Brian Kemp signed one of the most restrictive anti-abortion laws in the nation, a heartbeat bill that bans abortions after six weeks.

It’s being called a backdoor abortion ban, because of the short amount of time between when a woman could detect her pregnancy and when the restriction kicks in. In many cases, women don’t find out they’re pregnant within the first six weeks, and yet the law would force them to carry a pregnancy to term, denying their the right to choose.

It was a point Rep. Alexandria Ocasio-Cortez (D-N.Y.) made on Twitter last night in the wake of the law being signed.

Most of the men writing these bills don’t know the first thing about a woman’s body outside of the things they want from it. It’s relatively common for a woman to have a late period + not be pregnant.

So this is a backdoor ban. https://t.co/xWd9GAj51b

But her pointing these facts was too much for a great deal of men who will never be pregnant or experience menstruation. They felt the need to defend Georgia’s restrictive law. Conservative pundit Ben Shapiro—and noted “AOC Debate Me” enthusiast—wanted her to know she was wrong.

It's not a "backdoor ban." It is a ban on abortion after six weeks of pregnancy, just like it says it is. The fact that this is early in pregnancy is the entire point of the bill. The fact that a six-week-old embryo is apparently just a missed period to you is disturbing. https://t.co/3KtMlwN7sf

In fact, just about everyone on the staff of Shapiro’s site, the Daily Wire, weighed in. They could not handle Ocasio-Cortez using the phrase “late on your period.” Which, to be clear, means that a woman’s period is late, aka she hasn’t shed the lining of her uterus in 28 days. This could happen for a number of reasons: stress, diet, general body chemistry, and also pregnancy. Still, men were confused.

Some women, however, set Shapiro straight and explained how menstruation works.

Thanks for proving her point that you lack a rudimentary understanding of women's health.

this is one of the reasons I'm so vocal re: normalizing talk about periods.

when men – WILLFULLY – have no idea how menstrual cycles work, you get things like this. not that any of them are acting in good faith, but bodily autonomy requires recognition of that body. https://t.co/GTvU3nML2A

Georgia’s new law isn’t set to go into effect until 2020, and will likely be challenged in court before then.