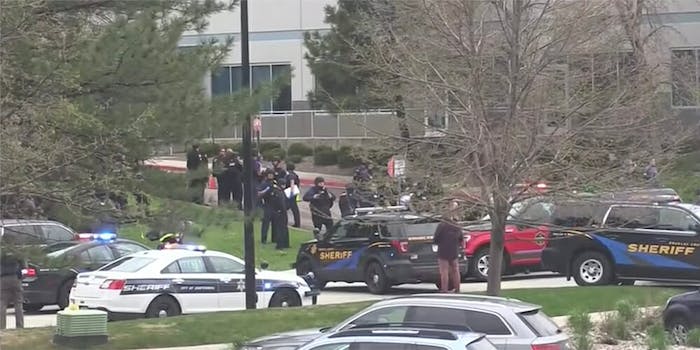 Wikipedia said it alerted law enforcement about the edit.

Multiple students were injured and one student was killed in a mass shooting at a Colorado STEM school on Tuesday. The shooting may have been alluded to on the school’s Wikipedia page eight days prior.

On April 28, someone anonymously added, “Do they work? We shall see.”

Hey, @dcsheriff regarding #STEMShooting on Highlands Ranch — it looks like someone may have alluded to a shooting several days ago on the school’s Wikipedia page. Screenshot attached. Will link in comments. pic.twitter.com/kmJfiGBz2U

As multiple tweets pointed out, the threatening text was added eight days before the shooting took place. The change was made by an anonymous user whose IP address is still available to the public. It is the only change the user has ever made anonymously under that specific IP address, according to the user contributions’ page.

According to an IP address lookup website, the user’s IP address traces back to Littleton, Colorado, the same area the shooting took place.

Update 3:38pm CT, May 8: Samantha Lien, a spokesperson for Wikipedia, told the Daily Dot that the company reached out to law enforcement about the edit.

“Generally, potential threats of harm on Wikipedia are escalated to an emergency email address that is monitored 24/7 by the Wikimedia Foundation Trust and Safety team,” Lien wrote in an email statement. “The Wikimedia Foundation has reached out to law enforcement about this edit, as is our standard practice in keeping with our own protocols developed closely with the FBI.”

“The edit was redacted from the revision history by other volunteer Wikipedia editors earlier today,” Lien said. “Which is a common practice taken by volunteers when edits pertaining to potential threats, libel, copyright violations, or other harmful content are included in the edit history of an article.”

The STEM School Highlands Ranch is a K-12 public charter school. The Douglas County Sheriff’s Office announced on Twitter on Tuesday evening that one student was killed and eight students were injured, with several of them in critical condition. As of the time of writing, two shooters were in custody. Both of the shooters are students at the school; one is an adult male, and one is a juvenile male.

Columbine High School, the site of the 1999 shooting that left 13 students dead, is also just eight miles down the road from the STEM school.

The Douglas County Sheriff’s Office did not immediately respond to the Daily Dot’s request for comment.