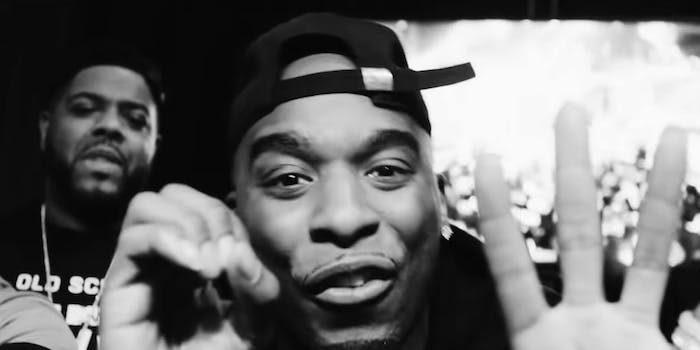 Nick Cannon fueled the fire between himself and fellow rapper Eminem with the release of his second diss track in a week.

In Cannon’s track “Pray for Him,” he says Eminem will never be a legend and accuses him of “gettin’ face lifts like an Instagram whore” and voting for President Donald Trump. “Pray for Him” is set to the beat of Jay-Z’s 2001 “Renegade,” with Cannon slightly altering Eminem’s original verse.

“No you debate and hated and viewed in America as a motherfuckin’ drug addict,” Cannon raps. “You’ll never be a legend. Now when you stop and start to stare at who’s in the mirror/Look at all that fucking botox, bitch I know you embarrassed … I bet you never thought the killshot would come from a Cannon.”

The feud started last week when Eminem referred to Mariah Carey, Cannon’s ex-wife who was also rumored to at one point be dating Eminem, as a “nut job” in his new song “Lord Above.”

Cannon fired back on Monday, releasing his first diss track “The Invitation,” in which he called Eminem a crack addict, a bad father, and rapped that he “heard your chauffeur got a video of you suckin’ a cock.”

Eminem, whose real name is Marshall Mathers, tweeted back in response to Cannon writing, “U mad bro? Stop lying on my dick. I never even had a chauffeur, you bougie f*ck.”

The drama between Cannon, Carey, and Eminem started back in 2009 when Eminem released “The Warning,” a diss to Carey who has for many years denied the rumor that she and Eminem were ever together.

Other celebrities have also stepped into the ongoing feud to side with either Cannon or Eminem.

“I don’t understand to save my life why someone would pick a fight with EM,” 50 Cent wrote. “He is a different kinda animal, I haven’t seen a motherfucker come close to beating him man.”

Eminem’s response to Cannon’s second track is yet to come.