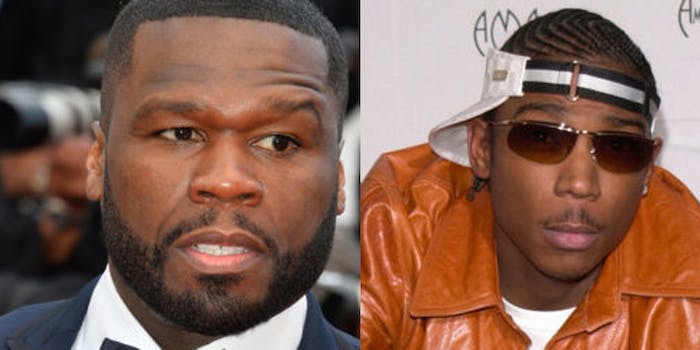 50 Cent reignited his longtime beef with Ja Rule on Friday in an admittedly pretty creative way—by hoarding a bunch of his concert tickets being sold on Groupon.

Apparently Fiddy came across a Groupon ad for tickets to an upcoming Ja Rule concert, and ridiculed his nemesis over the price of the tickets by taking a screenshot and posting on Instagram.

“People think I’m mean so go see this,” he wrote, adding a thinking-face emoji. “$15 bucks wait what I do now 🤷🏿‍♂️ LOL.” Shortly after, he added an update: “I just bought 200 seats in the front so they can be empty.”

He’s since removed the post, but because nothing is ever really gone from the internet, someone captured a screenshot so the moment could live on forever.

#50cent bought a whole bunch of #jarule tickets on Groupon

The two rappers have been going at it for over a decade now, and it doesn’t appear that the feud will resolve itself anytime soon.

Just last month, Ja Rule was forced to cancel a concert in Syracuse, NY, due to flight delays. “But I will be back to tear it down love y’all Syracuse,” he wrote on social media to his fans. “Only 10 tickets sold don’t nobody want to see that shit, you talking about wait we get a lot a people on the walk up,” Fiddy fired back at his foe. “Get the fuck outta here get the strap.”

Ja Rule has yet to respond to this latest affront from Fiddy, but he told XXL Mag at the time of the canceled show, “Fuck y’all too y’all always trying to discredit me on some sucker shit.”

“Y’all fuck wit 50 and them over there that’s cool,” he added. “But respect what I’ve done and brought to this game.”

Okay, Ja, we respect what you’ve brought to the game. But in the meantime, why don’t you two just get a room, already.