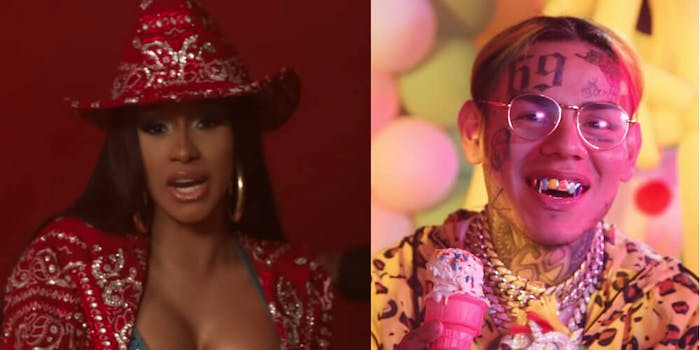 Tekashi 69 alleges Cardi B was a Bloods gang member

A representative for the rap princess is denying the allegation.

On Thursday, Tekashi 69 lived up to his Tekashi Snitch Nine moniker by outing more alleged members of the Nine Trey Gangster Bloods, including rap princess Cardi B.

Tekashi 69, born Daniel Hernandez, was arrested in late 2018 on racketeering, gun, and drug charges. He agreed to cooperate with the prosecution in exchange for a lighter sentence. And this cooperation has included outing the gang afflictions of fellow rappers.

“When I was 16 years old, I used to hang out with a lot of Bloods,” she once told GQ. “I used to pop off with my homies. And they’d say, ‘Yo, you really get it poppin’. You should come home. You should turn Blood.’ And I did. Yes, I did. And something that—it’s not like, oh, you leave. You don’t leave. Stripping changed my life. When I was a stripper, I didn’t give a fuck about gangs, because I was so focused on making money.”

Hernandez also said in court that he didn’t copy the way she rose to fame. “I knew who she was. I didn’t pay attention,” he said.

People reacted to the news with an onslaught of memes and jokes.

“Judge: Mr. Hernandez, you’re still facing up to 2 years in prison. 6ix9ine: What do you think the B in Cardi B stands for?” Twitter user @taebandss_ wrote.

Judge: Mr. Hernandez, your still facing up to 2 years in prison

6ix9ine: What do you think the B in Cardi B stands for? pic.twitter.com/Jsk2QAw2JL

6ix9ine: I gave y’all Trippie ,Casanova, the whole Nine Trey bloods up to their leaders and even retired rapper Jimmy Jones . Can I go now ?

6ix9ine: Y'all ever heard of a rapper Cardi B ? pic.twitter.com/2aZD8HEMNz

Nicki after hearing that 6ix9ine snitched on Cardi B too pic.twitter.com/ksch8Dw0hQ

Cardi B when they ask her who’s 6ix9ine pic.twitter.com/NlqxVErU37

Cardi B was just sitting at home getting cheated on minding her own business and 69 snitching on her????

“Just saw 6ix9ine snitching on Jim Jones. Then seen Shia LaBeouf trending, I thought 6ix9ine got him too. It’s too much going on today,” Twitter user @drocthaboss wrote.

Me trying to recall if I was ever a member of the Nine Trey Bloods after 6ix9ine tells on Cardi B and Jim Jones pic.twitter.com/y6Lf56i255

D.A. “Is he a member of Nine Trey Bloods Gang”

If anything, Tekashi 69 should probably start calling himself a former rapper now.