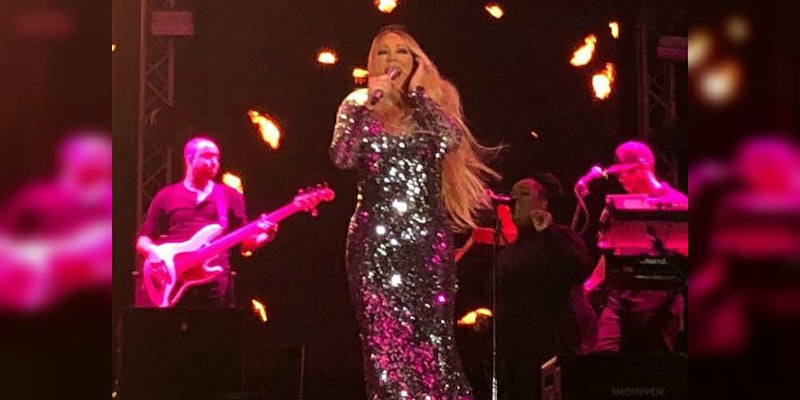 Advocates wanted the singer to speak out against the jailing of women's rights activists.

Mariah Carey performed in Saudi Arabia Thursday night, disappointing the many women’s rights activists who had called for her to cancel the show and boycott the country for its violation of human rights.

Since Saudi Arabia began loosening restrictions on music and entertainment, international entertainers such as the Black Eyed Peas and Enrique Iglesias have performed in recent months. According to Page Six, Saudi Arabia’s General Entertainment Authority promised a series of major performances from international celebrities, and those celebrities are taking multimillion-dollar deals for their shows.

Carey is by far the biggest American entertainer to perform in Saudi Arabia and faced pressure online beforehand to cancel her show. Much of this pressure came from people who attempted to bring the plight of jailed women’s rights activists to Carey’s attention.

“Mariah Carey is giving a concert tonight in Saudi Arabia,” Amnesty International tweeted. “While she’s on stage, many brave women activists are in jail facing torture & other abuse simply for demanding their rights. Mariah should use her voice to call for their immediate release.”

Remember, thanks to my sister @LoujainHathloul, you r able to perform in Saudi Arabia.

I wish she can attend your concert. But she’s locked behind bars because she tried to improve women's condition.

Don' forget to thank her on stagehttps://t.co/0Pf7bfz3yB

Dear @MariahCarey, I hear you’re planning on performing in #Saudi Arabia: are you aware that women’s rights activists have been detained without charge since May 2018 & tortured at the orders of Crown Prince Mohamed Bin Salman? https://t.co/NqbRBlYpR4

Mariah Carey is giving a concert tonight in Saudi Arabia. While she's on stage, many brave women activists are in jail facing torture & other abuse simply for demanding their rights. Mariah should use her voice to call for their immediate release. https://t.co/UpwRmCF2wY

People also sought to convince Carey to cancel the show over Saudi Arabia’s role in the crisis in Yemen.

Hearing @MariahCarey will be performing in Saudi Arabia is truly disappointing. As a long time fan, who has family in war torn country of #Yemen, I kindly ask you to cancel this trip! My ppl are suffering from US bombs and Saudi warplanes. #YemenCantWait https://t.co/CkSWXPm7mG

I can’t believe @MariahCarey is going to perform in Saudi Arabia! A child murdered every 7 minutes by the Coalition .. which can stop at any time if Trump calls and withdraws our troops and support , people are fasting for days just to raise awareness , and she is PERFORMING? !

Among calls for Carey to boycott Saudi Arabia for its human rights abuses, an alternative emerged: She could use her platform to uplift the plight of the women who had been jailed for their activism. Carey, however, went forward with the show and didn’t heed their requests to shine a light on the rights violations.

That hasn’t stopped Carey’s publicist from framing the concert itself as a step forward for gender equality, though. “Presented with the offer to perform for an international and mixed gender audience in Saudi Arabia, Mariah accepted the opportunity as a positive step towards the dissolution of gender segregation,” the publicist said in a statement to the Associated Press. “As the first female international artist to perform in Saudi Arabia, Mariah recognizes the cultural significance of this event and will continue to support global efforts towards equality for all.”

Activists see entertainers like Carey as a cover-up, making Saudi Arabia appear more progressive than it is. Omaima Al-Najjar, a Saudi-born political refugee and activist explained to the Associated Press, “The Saudi government is using entertainment to distract the people from human rights abuses.”