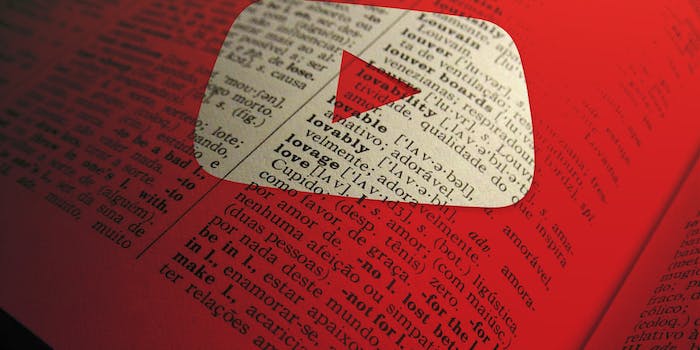 Photo via Jeff Belmonte/Flickr (CC BY 2.0)

There’s a new, mysterious, and creepy pronunciation guide on YouTube

Is this another mystery, or just a guide to learning words?

The year 2013 is famous on the Internet as the year when two long-standing mysteries—Pronunciation Book and horse_ebooks—dovetailed into a video game reveal that left the Web less than impressed.

Now, a new channel is following the Pronunciation Book formula, and it has us wondering: Is another game afoot, or is someone just capitalizing on the hype for easy clicks?

The Pronunciation Guide channel has only 40 subscribers, bears a user icon of a blonde young woman, and has only been active on YouTube since Feb 22, 2015. Its most popular video, a guide to pronouncing the word “Bodyswap,” only has 79 views, but thanks to its relentless uploading of new words, the overall channel has around 18,000 views.

New videos stopped appearing on the feed about five hours ago. At press time, the last upload was for the word “Electroshocked.”

There’s no indication yet of a larger storyline on par with the Pronunciation Book mystery, which devolved into a countdown after three years of uploads. However, a lot of the channel’s recent words do seem creepy; they’re focused on domination and electricity.

The new pronunciation channel uses computer pronunciations instead of human voices, and it hasn’t yet started including sentences in its uploads. To be fair, Pronunciation Book didn’t either, at least at the start.

We have on our hands either a new internet mystery or a YouTube channel dedicated to telling us how to pronounce every word with the prefix “electro.”

Photo via Jeff Belmonte/Flickr (CC BY 2.0)