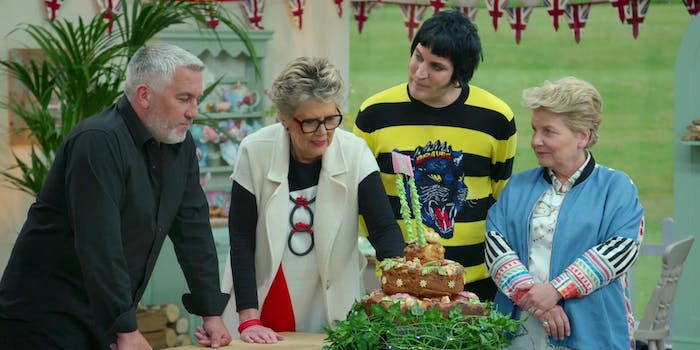 2 Netflix series are getting weekly releases in the U.S.

It's a model Netflix already uses in other countries.

Netflix might have helped introduce us to the binge-watch, but it’s trying something different for some of its newer releases.

The latest season of The Great British Baking Show—a popular British reality competition series that’s garnered a U.S. fanbase after airing stateside on PBS and streaming on Netflix—just dropped on Netflix last Friday. But fans quickly discovered that only the season premiere was available to view. Future episodes, according to the show’s landing page, will be released on Fridays, just three days after each episode airs on Channel 4 in the United Kingdom (where it’s simply called The Great British Bake Off).

Another upcoming series, the Netflix original hip-hop competition series Rhythm + Flow, will drop during a three-week event with the episodes split up to keep the final results from spilling out onto the internet.

But as reports spread that Netflix appeared to be switching over to a weekly release model like traditional television and Disney+, Netflix pushed back. In response to several outlets, Netflix emphasized that it’s done weekly releases of licensed shows before while using the model to keep the winner of Rhythm + Flow a surprise.

the weekly release of licensed titles (like Great British Baking Show) isn't new and in hopes of keeping Rhythm + Flow's winner a surprise, we're trying something new! but not happening with more shows than that

Although streaming services like Netflix and Amazon Prime have streamlined the binge-watching process, it’s not a novelty that Netflix is using the weekly model for two of the reality competition shows it makes available for streaming.

Patriot Act with Hasan Minhaj is released on a weekly basis and My Next Guest Needs No Introduction with David Letterman dropped new episodes every four weeks; it was also a mainstay with now-canceled talk shows like The Break with Michelle Wolf and Chelsea. Internationally, many series licensed out by Netflix like Star Trek: Discovery and The Good Place also have a weekly release schedule.

It’s also a mainstay at Hulu, where shows like The Handmaid’s Tale and Four Weddings and a Funeral have a weekly release schedule after an initial batch of episodes are released on the service; full seasons dropping on Hulu is a newer concept reserved for some of its shows. Even Amazon Prime played with the weekly release schedule for Matthew Weiner’s series The Romanoffs.

For The Great British Baking Show, introducing a weekly schedule is a newer novelty. Instead of waiting for an entire season to be released well after it aired in the U.K., U.S. fans only have to wait three days for a new episode. It not only allows them to jump into the wide conversation of the series with everyone else, but they’ll also only have to avoid certain parts of the internet for three days once the latest winner is finally revealed.