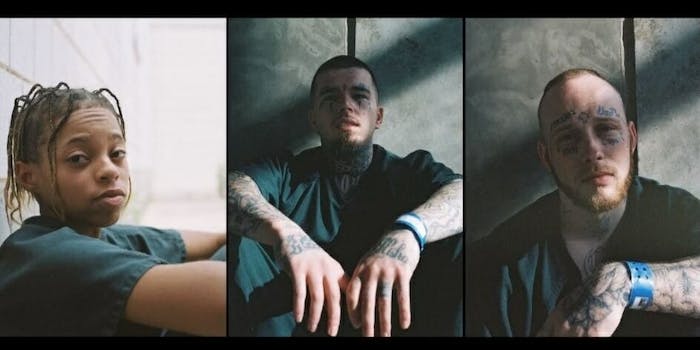 You've seen plenty of prison shows. But 'First and Last' offers something more.

The prison industrial complex is an incredibly outsized aspect of American life, and as such, it has an outsized place in American entertainment. Few CBS dramas don’t feature a police officer in a leading role. Every year, a least one Sundance indie film follows an ex-con trying to get their life back on track. The average American TV or film viewer probably has a solid grasp (or at least thinks they have a solid grasp) on various aspects of the criminal justice system just from their media diet.

How do you tell a fresh story about prison after Oz, Orange is the New Black, Prison Break, Law and Order, Making A Murderer, The Night Of, The House I Live In, and The Farm? It’s a difficult proposition in a country fascinated by crime, a country that houses 22 percent of the world’s prisoners despite having just 4 percent of the world’s population. And yet, First and Last is up to the challenge.

The new Netflix documentary series offers a fresh take on the “reality behind bars” genre of documentary storytelling. As the title suggests, each episode features inmates on their first or last days in prison. The result is a surprisingly moving, insightful survey of the American criminal justice system through the microcosm of Georgia’s Gwinnett County Jail.

The inmates who are new to prison make for more compelling subjects. For them, the stakes are high. They could either end up doing time or walking free, depending on a series of complicated and emotional choices they are going to make over the course of an episode.

It’s macabre to say, but the filmmakers struck gold with the first episode. An 18-year-old named Alex is arrested along with older men, Dontrell and Andre, after guns and drugs are found during a routine traffic stop. It’s clear that the guns and drugs didn’t belong to Alex, but he is expected to take the charges because Dontrell and Andre have already been in prison and have children and more adult responsibilities. You can also assume they are more senior gang members, but it is never explicitly stated: This fly-on-the-wall perspective is one of First and Last’s great strength.

Alex knows he has a good shot of walking free if he snitches on Dontrell and Andre, but the consequences for him on the outside might be worse than just pleading guilty to a first offense. As an audience, we know this young man is at a crossroads and whatever decision he makes in this chaotic moment could have a profound impact on the rest of his life.

Stakes are lower for the inmates about to leave prison. A new chapter in their story is just beginning. They and their loved ones can speculate about whether they will turn over a new leaf or end up back in prison, but all of that will happen off-camera over the coming months and years. Will Shantee and Velma stay clean for the sake of their children? Will Jesus and Jeffrey stay on the straight and narrow despite toxic influences? We will never really know. While these last moments in prison are compelling, they aren’t necessarily dramatic in the Shakespearean sense of the word.

The “last” subjects don’t always provide intense drama, but their experiences do often yield poignant moments. Scenes as simple as Jesus, 19, getting a haircut before he is released, or Amy, 54, realizing that no one is coming to pick her up when she is released are loaded with deep meaning, simple beauty, or intense pain. Amy asking the police for a ride home and the cop commenting that at least she doesn’t have to wear handcuffs this time is as emotionally charged a scene as you would see in an Oscar-winning film.

First and Last wouldn’t be as effective as an examination of crime and punishment without the central conceit. Showing us prisoners at the beginning and the end of their time in prison makes this series equal parts addictive and thought-provoking. This tension allows the filmmakers to raise a central question that is never explicitly asked and never concisely answered, “Does prison work?”

The series works best when the subjects’ stories are contrasted against each other, playing out a specific angle of this broad and complicated question. The filmmakers really get this by the season finale. A sequence cross-cut between Edgar, a career criminal in for a parole violation, and Jeffrey, a young man who likely has a life of crime ahead of him, is among the best work in the series. The finale also features a chorus of prisoners offering experiences, advice, and dreams of their future directly to the camera. It’s deeply affecting.

Over the course of the season, we see the broken aspects of the criminal justice system, and through that repetition, a silent, yet compelling case for reform is made. Part of Alex’s dilemma in the first episode is cash bail (a practice many prisoner advocates want to end). His family doesn’t have $1,200, but the older men in jail with him do, and that has an impact on his calculations. Several of the subjects getting out of jail are drug addicts, and you don’t get the sense that whatever treatment was provided in prison has given them the to tools to succeed. Amy, a grandmother, ends up in jail after a series of unfortunate events that began with her inability to pay a speeding ticket, an issue that doesn’t exist in countries where traffic violations are based on the offender’s ability to pay.

First and Last, for better or worse, treats prison as a revolving door. Each episode features new inmates coming in and going out. Some of them are compelling enough that they become embedded in your memory while others drift through the proceedings and out of your mind as quickly as the 42-minute runtime passes by.

The beauty of the series is the same beauty as an impressionist painting: By showing us so many subjects in so many different circumstances, we get a vision of a broken system that, in its way, stands in for the whole. Without beating you over the head with injustice, First and Last reminds you of the inequality in the system: Most of the guards are white and most of the prisoners are black. Bail for poorer inmates means a family member is emptying their bank account. Some inmates get to go to supportive homes surrounded by family while others go right back to the environments that landed them there in the first place.

First and Last can be tough to watch at moments, and that is what makes this a show worth watching. The filmmakers are generally successful at alternately prioritizing high drama and systemic critique. The circumstances of the prisoners are alternately highly dramatic and everyday events. Yes, some episodes aren’t filled with pulse-pounding intensity, but that’s kind of the point. And when the mundanity of difficult lives ends in tragic consequences, that, too, is just another day when someone was “in the wrong place at the wrong time” in America.

In First and Last, prison is viewed exactly how it is for many Americans in the country’s most vulnerable communities—as a fact of life.