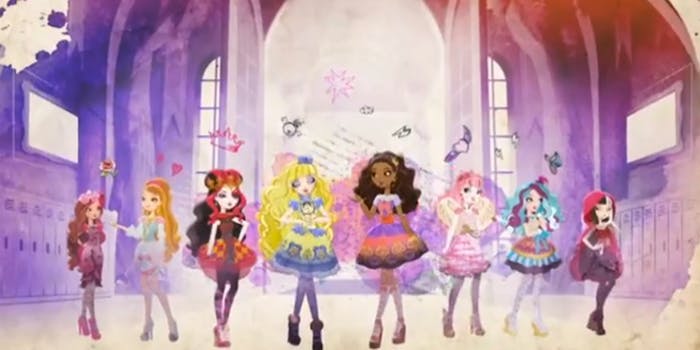 Netflix continues its push for kids’ programming with ‘Ever After High’

Netflix is hoping the fairytale fandom makes the jump.

The appeal of animated films like Frozen and How To Train Your Dragon has apparently crossed over to Netflix original programming. The company just ordered 12 episodes of Ever After High, a doll franchise from Mattel.

The series will chronicle the lives of the teenage offspring of fairytale characters like Snow White, Pinocchio, and Little Red Riding Hood, as the “royals” and “rebels” navigate high school. A movie version of the series, Ever After High: Spring Unsprung, will debut in early 2015, to be followed by the series.

Ever After High does have a dedicated fandom of teenagers online, and Netflix is no doubt attempting to draw a younger demographic to the site. This follows up Netflix’s recent announcement that it will premiere an updated version of The Magic School Bus series, as well as a series based on the How To Train Your Dragon franchise.

H/T The Wrap | Screengrab via Ever After High/YouTube