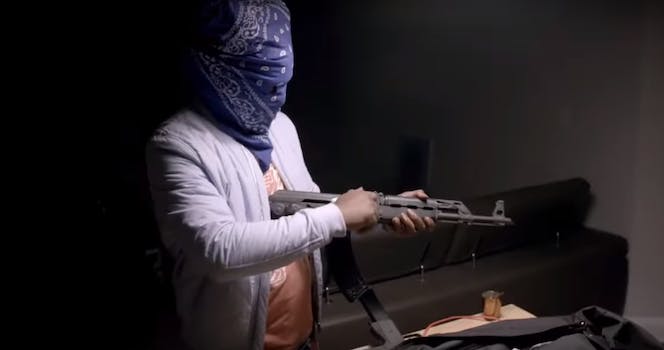 ‘Dope’ is an irresponsible, blunt-force documentary about drugs

In this harrowing Netflix series, the war on drugs comes home to roost.

Netflix has been pushing crime docuseries like drugs lately. Case in point, Dope joins other shows like Drug Lords and Dirty Money in a string of recent additions about shadow economies and purveyors of illegal products. Netflix seems determined to tackle all the myriad angles related to the drug war, probably because we can’t get enough.

Dope is especially tied to Drug Lords. Both are a quick watch, spanning four episodes under 50 minutes, and both are aesthetically unoriginal, mimicking various basic cable series. Drug Lords is a history show, focusing on organizations and individuals. Dope is closer to Drugs, Inc., using a rawer, “boots on the ground” style which goes back to everything from The First 48 to Cops (though the music in this show is uniquely terrible). Drug Lords focuses on where drugs came from in the past. Dope is more interesting in its examination of how drugs are being distributed, and where the drug trade could possibly go in the future.

The first episode, America’s Cup of Coffee, about cocaine on the streets of Oakland, California, quickly introduces several memorable subjects. Footage of a man injecting cocaine, claiming he’s been a drug tester since 1974 is haunting. One woman, Abrosha, who’s an experienced pimp and dealer, could easily be the inspiration for a character on HBO, though other parallels to certain prestige dramas are more disturbing.

Dope goes full David Simon in the second episode, tackling the heroin epidemic in Baltimore, which is as bad or worse than anywhere in the country. The episode begins by focusing on the riots inspired by the death of Freddie Gray, discussing how pharmacies were looted, supposedly giving dealers access to the powerful and deadly opiate fentanyl, which, when cut with heroin, has led to a spike in overdoses. The suggestion that people were taking drugs in this kind of opportunistic way feels not only inaccurate but offensive given the real reason the riots took place.

The uncomfortable political implications don’t end there. In the first episode, the raids that officers conduct harken back to scenes on The Wire where a big show is made of putting “dope on the table.” It’s a lot of sound and fury, signifying nothing. It’s posturing which fails to produce any kind of substantial change. Then there’s the third episode, which profiles the Sinaloa Cartel. This is an association that’s as brutal as it gets, and one that has committed a litany of atrocities. Yet Dope mostly focuses on its marijuana trade, which is huge in the United States. As clips of President Donald Trump talking about his wall and border agents rounding up Mexicans are interspersed with footage of the Sinaloa’s operation, one has to ask just what the show is trying to say here.

The final episode centers on the crack trade leading up to Memorial Day in Chicago, another area which has become highly politicized thanks to the president. There are plenty of images likely to stick with you in this one, from a suspect who appears to swallow his stash to avoid arrest, to a prostitute who claims to have been smoking crack for half her life, to a cop who goes out of his way to pull someone over for “cannabis.” But more than drugs, this last installment of Dope is interested in the proliferation of guns in the city. Again, violence and drugs in Chicago are a real problem, but the series explores these issues with a significant lack of nuance.

Dope tries to humanize all its subjects, but it fails to provide context to the larger, systematic influences that define their existences. Videojournalist Pauley Lapointe is presumably included to provide some objectivity, though he only appears in the last episode, and doesn’t have much to add. Meanwhile, an officer in the same episode actually says at one point that “firearms and narcotics are one in the same,” which is infuriating because if that’s true, then why don’t we treat them that way? Drugs are regulated to an oppressive degree in this country, yet the groups who purport to be tough on crime are the same ones who balk at the idea of the slightest bit of gun control.

It’s too much to ask Dope to tackle these contradictions in a mere four episodes, but through a bounty of interviews with cops, criminals, and addicts, one thing becomes clear: the war on drugs is, and always has been a quagmire. The casually depressing way America’s narcotics policies are portrayed in this show make it a frustrating watch, shocking and graceless.