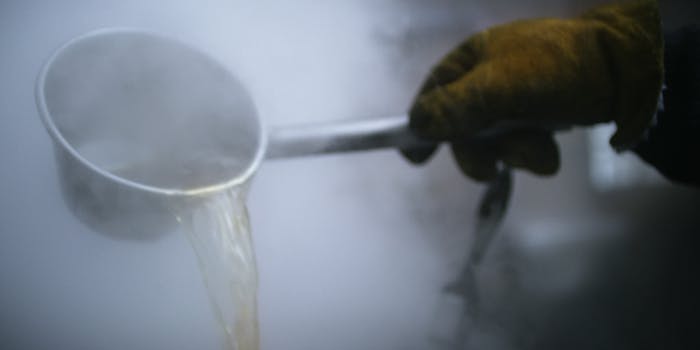 From predatory loans to Volkswagen coverups, this 6-part Netflix series will leave you gasping for air.

This enlightening project is executive produced by Alex Gibney, the prolific documentary filmmaker whose work includes Enron: The Smartest Guys in the Room, Going Clear: Scientology and the Prison of Belief, and the Academy Award-winning Taxi to the Dark Side.

There’s a Black Mirror element to the cinematography, and it gives the stories an appropriately haunting tone. In “Drug Short,” the viewer is thrown into a deep dive inside the singular greed of Valeant Pharmaceuticals, from the vantage point of a stock-shorting prospector. Series highlight “The Confidence Man,” tells the true story of how President Donald Trump came into near-continual public consciousness, including the underrated importance of The Apprentice. It’s all a whirring of comedy, alarm, and unconscionable shock.

Dirty Money doubles as a unique sociological study, from within the material and also from behind the cameras. Just take Gibney’s muscular survey into Volkswagen’s emissions scandal in “Hard NOx.” It was found that emissions testing “defeat devices” were installed to fool the Environmental Protection Agency, hiding evidence that the German automaker’s “clean diesel” engines were releasing hazardous levels of particulate pollutants. Volkswagen’s main offenders ended up with a featherweight slap to their gold-encrusted wrists. Did Gibney commit to the documentary because he felt fooled, being an owner of a vehicle generally marketed toward more affluent buyers? Either way, he presents previously unreported evidence of the coverup.

“Payday” weaves its web around Scott Tucker’s predatory payday loan scheme. The serpentine designs of the loans provide considerable intrigue, but it’s Tucker himself, his wife, and his associates who are the entertainment and horror. After the FBI and various courts destroy his operation, Tucker and his family are unable to properly grasp the true scaling of his wrongdoing. Director Jesse Moss perfectly captures the cognitive dissonance of the crestfallen Tucker, who cannot for the life of him understand why he’s being treated like a criminal.

Armed with a dangerous, even rock star appeal, Dirty Money entertains as well as it informs across its six episodes. But you may need a shower afterward.