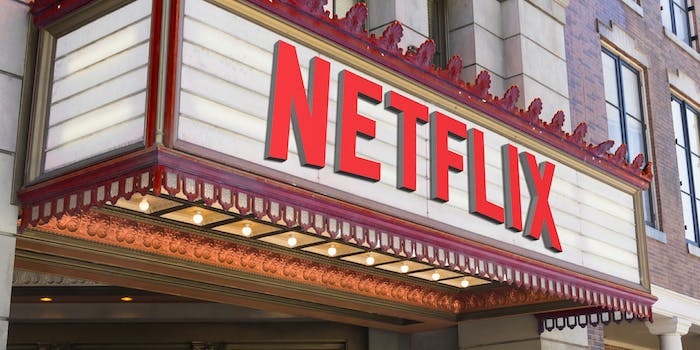 Netflix to release a whopping 80 original movies in 2018

Netflix is getting ready to flood you with even more content.

On Monday, Netflix’s Chief Content Officer Ted Sarandos explained during an investors’ call that the company is planning to release roughly 80 films next year, a significant increase from 2017. He cited two big-budget films—Will Smith thriller Bright, directed by Suicide Squad‘s David Ayer, and Martin Scorsese’s The Irishman—as Netflix’s more ambitious releases, and said with Bright in particular: “I think people will start seeing the potential for this original movie initiative, that it could be done on the enormous scale we have on the television side.”

In 2017 Netflix had more success with series like Narcos and 13 Reasons Why; it struggled to land a hit with its original films, though it brought in interesting directors like Macon Blair (I Don’t Feel At Home In This World Anymore) and Adam Wingard (Death Note), and interesting films like Okja and Gerald’s Game. The Adam Sandlerification of Netflix remains a mystery. Netflix also plans on building out its original anime with 30 new titles. Neo Yokio tested the waters last month.

It might seem like Netflix’s new price hike was timed with this new slate of content—and with its new 2018 price tag of $8 billion—but CFO David Wells said on Monday that there’s “no timing correlation between our intent to grow content and to grow content spending and the price increases. This has been planned for a long time.”

Netflix CEO Reed Hastings also commented on whether Netflix would be bidding on the Weinstein Company, which has imploded after accusations against co-founder Harvey Weinstein surfaced. “It would be extremely unlikely for us to be a bidder for the firm,” he said.