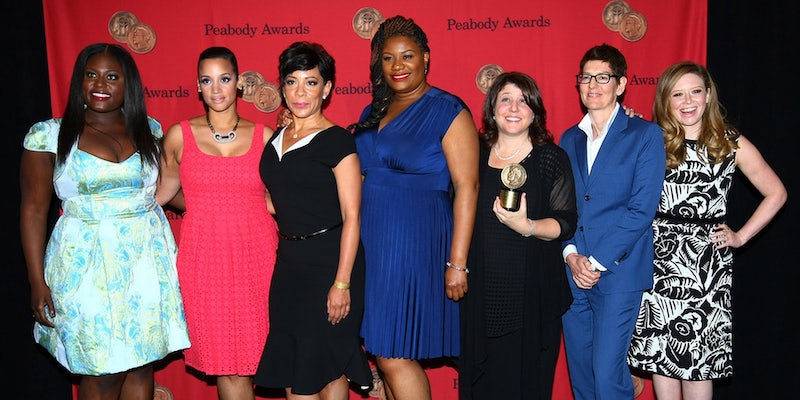 The streaming service got 31 nominations, more than double the number it received last year.

The Emmy nominations are out, and Netflix is proving to be force to be reckoned with.

This year, the streaming service got 31 nominations, which more than doubled the record-breaking 14 nominations it received last year; Netflix would go on to win three Emmys, including one for David Fincher’s House of Cards pilot.

But while last year’s nominations were mainly for House of Cards (with a few for the fourth season of Arrested Development and Hemlock Grove), this year’s nominations are spread out between three TV shows and two documentaries. With 31 nods, Netflix is only behind HBO and FX Networks for number of nominations (at 99 and 45 respectively).

Political thriller House of Cards will have to face off against True Detective, Game of Thrones (which has the most nominations at 19), and the final season of Breaking Bad in the drama category. The show is up for Best Drama, Outstanding Writing, and 11 other awards; stars Kevin Spacey and Robin Wright (who won the Golden Globe) are up for Emmys again, while Kate Mara and Reg E. Cathey were nominated for Outstanding Guest Actress and Actor.

Orange Is the New Black, which missed last year’s eligibility deadline, got 12 nominations this year, including Outstanding Writing and Directing. Fresh off winning Best Comedy Series at the Critics’ Choice Awards, it’s facing off against four-time winner Modern Family in the Best Comedy category. Taylor Schilling is up for Best Actress and Kate Mulgrew for Supporting Actress. Three actresses received nominations for Outstanding Guest Actress, including Internet darling Laverne Cox.

Ricky Gervais also received a nomination for Best Actor in a Comedy for Derek, while documentaries The Square and Brave Miss World also picked up nominations.

Most of the Emmy nominations went to traditional television, but while broadcast television has a diminishing presence among the nominees, Netflix is playing hardball, and it’s only a matter of time before other streaming services like Hulu, Amazon, and even Yahoo Screen get some Emmy love.