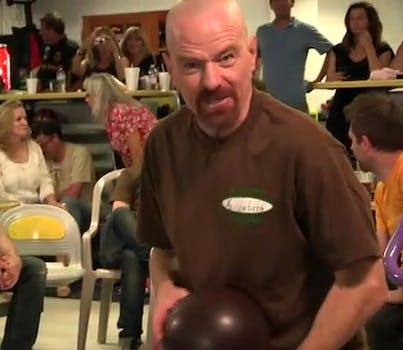 The stakes have never been higher in “Chris Hardwick’s All Star Bowling” series.

Itching for your next fix of Breaking Bad? The fifth season premiere of the tense AMC drama is only a few weeks away, but if you can’t wait that long, Nerdist roped in the cast to take part in the “Chris Hardwick’s All Star Bowling” series.

Though most of the Nerdist showdowns take place at a Los Angeles bowling alley, Hardwick and crew headed to Albuquerque, New Mexico (where Breaking Bad is filmed), to take on Cranston and co. at the show’s annual bowling tournament.

If you’re at all familiar with “All Star Bowling,” you’ll know to expect high-stakes competition, hilarious heckles, and almost as much drama as a Breaking Bad episode. Almost.

Without giving anything away, both teams have a secret weapon, which neither seemed to really know about before the contest. Elsewhere, Brandt shows off her stellar trash-talking skills, while Cranston cooks up an evil laugh more dastardly than any act Heisenberg has committed.

If Cranston et al. prevail against Team Nerdist, they’ll scoop an additional $1,000 dollars for charity, while this week’s episode reveals which challenging team has emerged victorious this season to scoop the $10,000 charity grand prize.

As with all the other “All Star Bowling” episodes, this is tremendous fun. Thankfully, it’s Cranston that the Nerdist crew is playing. We suspect Walter White would be knocking on the Nerdist office door after some of those heckles.