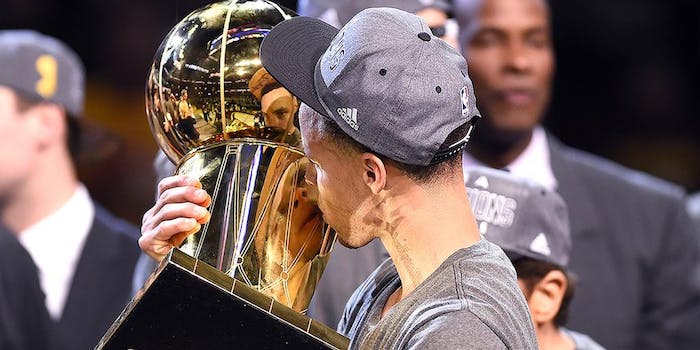 How the Warriors played small ball and wrangled LeBron James for their first title since '75.

After an NBA Finals for the ages, the Golden State Warriors are NBA champions. Tuesday’s Game 6 was another dramatic victory for the Warriors, as they had an answer for every last push by the nasty, Stone Age basketball of the Cleveland Cavaliers and held on 105-97.

It was a brand that proved unsustainable over a best-of-seven series. Every time the Cavs looked like they might put together a run, Steph Curry would knock down a long jumper or series MVP Andre Iguodala would make a fabulous play. Golden State is an unlikely champion, perhaps not as unlikely as the 2011 Dallas Mavericks or the 2004 Detroit Pistons, but for a team that won 67 games and were more or less the best in the league from day one, very few people were picking the Warriors to hoist their first championship banner since 1975.

The franchise spent much of the 1990s and 2000s in a desert of rebuilds and wasted talent that never coalesced into playoff victories. (Aside from the cult favorite “We Believe” Warriors of 2007.) Now that the Warriors are at the top of the NBA, how will this team be remembered in the coming years?

For starters, it was a dream season for Curry. He became one of only 14 players in league history to win the league MVP and championship in the same year. He’s entered the canon of unforgettable players and established himself as a maybe the greatest shooter of all time with that abbreviated form—as though he’s heaving the ball before finishing his absurdly fast release. During the fourth quarter of Game 6, it was all on display: the dagger threes, preternatural passing, perfect decisions. He’s a marvel.

WHAT A SEASON for the @warriors! pic.twitter.com/uE4joHgMKq

Curry took the leap this season by changing a few facets of his game. Most importantly, he refined his on-ball defense and took on the role of guarding the opposing team’s point guard with pride. He also improved his efficiency around the basket and finishing at the rim, and his point skills became diverse as he took reigns of Steve Kerr’s offense. Everyone who said that Matthew Dellavedova could shut him down in this series should send Curry a detailed apology.

Kerr took over a 51-win team with the best defense in the league and one of its most electric players and transformed them into an all-time great. How absurd is it to think that people questioned Kerr for choosing the Warriors (who play in his hometown state) over the lowly New York Knicks? Kerr surrounded himself with one of the league’s best coaching staffs, too. Alvin Gentry will be coaching Anthony Davis and the New Orleans Pelicans next year. Defensive guru Ron Adams might be coaching a team next year as well. Luke Walton… is the guy the players on the team want to party with.

Draymond Green established himself as maybe the baddest dude in the league. He’s going to get paid big dollars this summer. As Green was putting up a triple-double in the Finals, Mark Jackson called Klay Thompson the Warriors’ second-best player. I disagree, but Thompson had a memorable season that saw him make the All-Star game and set the record for most points in a single quarter. It’s all the other players that will make this team especially memorable. After years of being a superstar on mediocre teams, Iguodala hounded LeBron James all series and won the MVP of the NBA Finals. (As Zach Lowe of Grantland has pointed out, has there ever been a Finals MVP who teams put their worst defender on? At times the Cavs dared Iguodala to shoot.) Their defensive anchor, Andrew Bogut, defended the rim and stayed healthy all year. There’s also now a climax on the Shaun Livingston redemption story. David Lee, the highest-paid player on the Warriors, accepted his demotion to the bench. Festus Ezili came back from a lost season. Leandro Barbosa reminded everyone he was still in the league. Harrison Barnes had huge playoff games.

Let’s stop and recognize the best player in the NBA Finals and who I would argue deserved the MVP. It takes a thesaurus of superlatives to explain how great James has been. You could argue he’s been better in previous playoffs—at the very least, he’s been more statistically efficient—but he’s never shouldered as large of a burden for his time on such a huge stage for such a sustained period. Aside from a few token post-ups from Timofey Mozgov or Tristan Thompson or purposeless dribble drives from J.R. Smith or Iman Shumpert, he was the Cleveland Cavaliers offense to such an absurd degree for an NBA team, much less one playing in the Finals.

Whenever a Cavs player pounds the ball for too long or passes to someone not named LeBron Raymone James it looks like wasted time. Well before the 2015 Finals, James cemented himself as one of the greatest players in basketball history. But this series, one that saw him nearly average a triple-double and carry the rotting carcass of a team missing two of its three best players (or three of its seven best), has me wondering how high he is on the greatest players of all time list right now. James can’t touch Jordan, Russell, or Kareem, not yet at least. After that you’re looking at Magic, Bird, Wilt, Duncan, Kobe. Right now, James makes a case to supplant that entire neighborhood of legends.

The Warriors will also be remembered for the way they won the championship. They played like the future of basketball: with 3-point shooting, pace, space, small ball lineups. Every old-school hack can shut up and accept that there are many ways to win. But they were an old-school team in the sense that they were a collective. It wasn’t a superstar or two and some favors and some friendly vets. They were a group who played unselfish basketball and appeared to genuinely enjoy each other; and one that vindicated all of those Wild West Phoenix Suns teams of the mid-2000s, to boot.