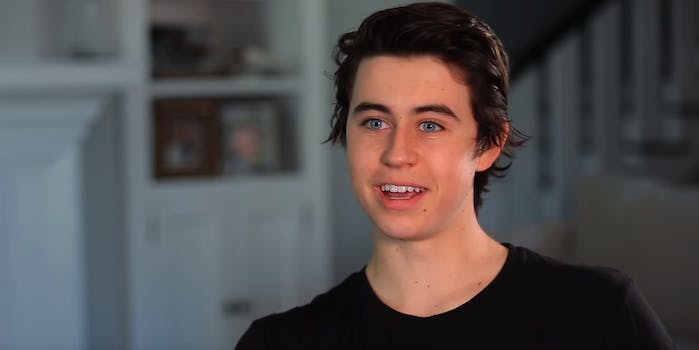 The webseries accompanying the documentary will show his life during the making of the movie.

Nash Grier is working to create content way longer than the popular six-second vines that made him famous. The 17-year-old Vine star (who boasts over 12.2 million followers on that platform alone) and social media force of nature will produce a currently-untitled autobiographical documentary, as well as a corresponding behind-the-scenes webseries about the documentary’s production.

Grier’s upcoming documentary project will show how the 17-year-old rose to social media fame in only a few years’ time. The companion webseries will show how his life changes during the documentary’s production. The Hollywood Reporter notes the entertainment personality will simultaneously film both projects. Grier, who’s repped by both WME and 26 MGMT, will produce the documentary and webseries through his NSHT LLC production company alongside the original content branch of the WME-owned agency IMG.

Grier has quite a lot on his schedule as of late. In addition to these new productions, he’s set to make his acting debut in the upcoming Fullscreen film The Outfield, scheduled for digital release on iTunes on Nov. 10, 2015. Grier also just teamed up with his brother and fellow Vine star Hayes to become ambassadors for healthy-eating organization FNV and launch a T-shirt design contest to help benefit the brand. Finally, the social media superstar is working as the creative director for DigiTour Media, where he’ll help develop original series for distribution on the company’s various channels.

Grier has started production on his autobiographical documentary and the behind-the-scenes webseries, which will wrap some time in the spring of 2016.