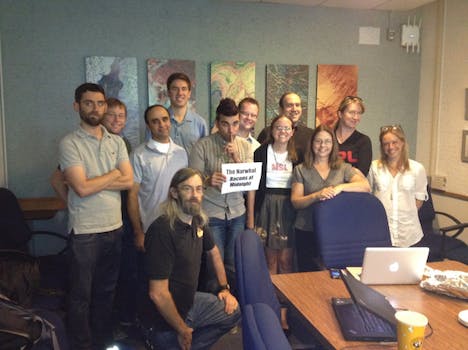 Bobak Ferdowsi and his colleagues on the Curiosity project answered Reddit's questions about landing something on Mars. Also this week: The founder of image-sharing site Imgur and Brent "Data" Spiner.

It was a week of fantastic AMAs, but with as many science fans as there are on Reddit, you just can’t beat a whole team of scientists who just put a robot on Mars. “We are engineers and scientists on the Mars Curiosity Rover Mission” was by far the most popular Reddit interview of the week, in part because it had gems like what their protocol is if they find alien life, a map of NASA parts strewn about one part of the Red Planet, and the care NASA scientists take to not accidentally bring Earth-germs to other planets.

At least two of the other interviews would have been the top post in a slower week—the guy who made Imgur, Reddit’s go-to free picture hosting site (did you know he was offered a buyout from Imageshack when Imgur was just six months old?) and Marvel Comics legend Stan Lee.

Two actors with certified geek cred stopped by, too—Brent Spiner, most famous for playing Data on Star Trek: The Next Generation, and Jason Mewes, who plays Jay—as in Jay and Silent Bob—in many of Kevin Smith’s movies.

1) We are engineers and scientists on the Mars Curiosity Rover Mission, Ask us Anything!

Since the Martian Day is 24 hours, 40 minutes, 40 minutes longer than an Earth day, do the JPL scientists and engineers live their lives on Martian days to stay in sync? (Indeed)

Yes. All of the operators (engineers, scientists, drivers, planners) live on Mars time, by shifting the schedule +40 minutes each day. This is in order to maximize the efficiency of each sol (Martian day of operations).

How did you come up with the name “Imgur”? (DeadBacon)

I made a list of about 15 names that I liked and then looked at which ones were available. I liked imgur because it’s kind of a play on the acronyms, img for image and your for ur. So in a way, it’s “your imager”. It also rhymes with sharer, so “your imager is the simple image sharer”.

3) Hi, Brent Spiner here. And just so you know, it really is me. AMA

Did you base any of your portrayal of Data off of people with Autism? (cws837)

No, I was unaware of it at the time. I have been subsequently made aware of the connection. Had I known, I might’ve pushed more in that direction, but then, it might’ve thrown things off. I’m very moved that kids with Autism have responded and related to the character.

Which Spiderman movie did you like best. 2002 with Tobey Maguire? or 2012 The Amazing Spiderman with Andrew Garfield? (jachien)

I love them all & if I had a favorite I wouldn’t tell you. I love working on them & working with the people who make them. And I wouldn’t wanna offend anybody by placing one over the other. I am such a wonderful person, the world should learn something from my example.

5) Jason Mewes back in the world wide interwebs! Ready to get my t-bag on. Snootch!!! AMA

I’m having trouble picking up goth chicks at the beach. Any advice? (saltnotsugar)

i didnt think or have never seen a goth chick at the beach, i feel they like to stay out of the sun yes?

6) I am Luke Muehlhauser, CEO of the Singularity Institute for Artificial Intelligence. Ask me anything about the Singularity, AI progress, technological forecasting, and researching Friendly AI!

I am a relatively healthy, non-smoking, physically active male in my early 30s. Assuming that, personally, money is no object, what are the “Vegas Odds” that I might actually live long enough to experience a Singularity, and in some manner escape the bonds of traditional “mortality?” (Solo_Virtus)

Unfortunately, the singularity may not be what you’re hoping for. By default the singularity (intelligence explosion) will go very badly for humans, because what humans want is a very, very specific set of things in the vast space of possible motivations, and it’s very hard to translate what we want into sufficiently precise math, so by default superhuman AIs will end up optimizing the world around us for something other than what we want, and using up all our resources to do so.

“The AI does not love you, nor does it hate you, but you are made of atoms it can use for something else” (source).

While there is no doubt that your expose’ will only improve security in the long haul, what are you thoughts/feelings on the immediate impact of your findings? (ryanmaynard)

At the end of the day, I know that people will use this for malicious purposes, just like any important vulnerability that’s disclosed. However, I have to balance that out with a question that’s been on my mind for a long time: How many people used this before I even thought of it? How many people have been robbed or worse, because of these buggy locks?

I’m not happy about any of this, but I think getting the info out there balances out the harm that may come from it being out there in the near future.