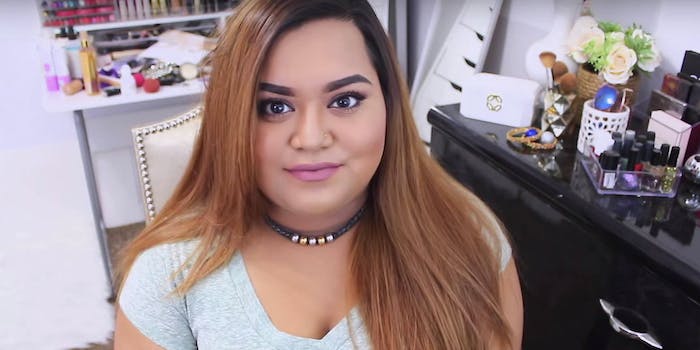 'No YouTuber is just a YouTuber.'

Nabela Noor remembers the video that changed things for her.

Last December, the 24-year-old beauty and lifestyle vlogger posted “Dear America” on her YouTube channel—which addressed being a Muslim-American and the negative media representation of the Muslim community, as well as Donald Trump’s agenda-driving Islamophobia. It brought her a wave of supporters, as well as a stream of hateful comments.

Noor discussed this pivotal moment during a VidCon panel about Asian representation on YouTube, and how just a month later, she was invited to ask a question at a GOP debate in Iowa. Noor was originally supposed to ask Trump her question, but he backed out, so she asked Jeb Bush:

In 2015, the number of hate crimes against Muslims in the U.S. has tripled, and on social media, where I spend a lot of time, I’ve seen many attacks directed towards fellow Muslims. This culture of hatred is only driving ISIS to radicalize, recruit, and incite violence. As president, what would you do to address this toxic climate and promote increased tolerance in the United States?

Afterwards, Noor started seeing backlash and death threats online. People called for her beheading. Trolls infiltrated the comment section of her videos, even if it was something as simple as an eyeliner tutorial. Her question about tolerance brought out the very intolerance she was trying to address.

Beauty vlogging is a massive genre on YouTube, and it’s powered heavily by women: Noor has more than 179,000 subscribers. After her GOP debate question, she saw people dismissing her role on YouTube as “just” a beauty vlogger. Last year, when megapopular beauty vlogger Bethany Mota participated in a State of the Union discussion with President Obama, she and fellow YouTuber GloZell Green were similarly dismissed for not being qualified enough to ask the president a question.

“No YouTuber is just a YouTuber,” Noor said by phone a few days before VidCon. “There’s so much more to us. We don’t just create awesome content, we also have stories and backgrounds.”

During the panel, Noor, who’s a creator in the Fullscreen network, offered up a bit of her background: She grew up in a predominantly white town to Bangladeshi parents, who were in an arranged marriage. Noor didn’t see people like her growing up, but when she started using YouTube, that changed. She wanted to make videos for girls like her.

Having high-profile creators like Lilly Singh, FouseyTUBE, and JusReign (who was also on the panel) is great for representation, but she says it has to go beyond that.

“There aren’t enough people standing up for the issue of how Islam is represented in the media,” she told the Daily Dot. “Just coming out in support of creators who do speak out about these problems and do speak out about Islamophobia. I think culturally we’re doing great in terms of representing South Asian culture and that’s exciting, but in terms of religion and in terms of having a vast majority of creators who stand up against Islamophobia, that I’m still anxiously awaiting.”

Sooo many people come through and stand up for body positivity, racism, etc. Stand up against Islamophobia. Be an ally & use your voice.

Noor is also an advocate for body positivity, and she singled out last year’s Dear Fat People video by Nicole Arbour and the massive backlash it inspired. The body positivity community and beyond roundly came out against the video. “There was this unified approach,” Noor said, but that hasn’t necessarily translated to creator pushback against anti-Muslim hate speech and Islamophobia.

“And I know it can get scary,” she said. “I know it can alienate a lot of your viewers who may have passionate feelings against certain religions. I can understand it’s controversial, but I also wish for more of that support because I know I’ve done videos that have been really controversial and I’ve wished at times that I had support. It’s scary. I’ve gotten death threats and so much hate and backlash, and support in times like that would be amazing.”

During another VidCon panel on body positivity, Noor discussed some of the double standards in regards to the plus-size community. She’s vlogged about losing 30 pounds and gaining it back, and tweeted her response to being called fat.

There's a huge problem that exists even within plus size beauty standards…and trust me there sadly ARE standards in this community.

Accepting of curves, but not rolls. Hourglass, but not pear shape. Collar bones, but not double chins. Doesn't seem so body positive..

She told the Daily Dot it’s inspiring that across YouTube, people can “turn on their camera and say, ‘Hey, shaming someone for their body is not OK.’”

Noor’s channel is unique in the YouTube landscape: She’s using her platform to call out anti-Muslim sentiment and body-shaming, which are both foundationally about fear and hate. She’s opening up conversations about message and culture.

She’s not “just” a beauty vlogger.