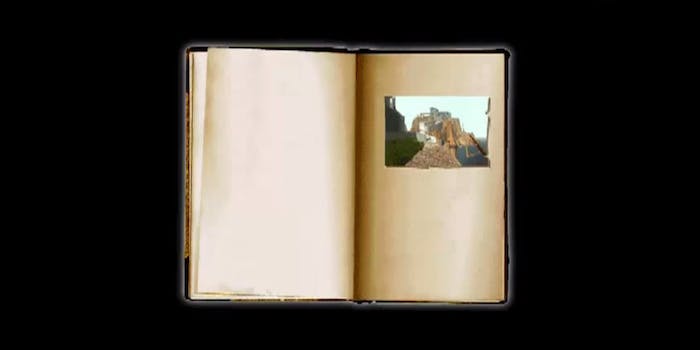 It's no puzzle why.

Imagine Lost mixed with The Neverending Story directed by David Lynch. Got it? Now you’ll understand why news about a Myst television show is so exciting.

Legendary Entertainment, the film production company behind Christopher Nolan’s Batman trilogy and the film adaptation of Frank Miller’s 300, has announced a deal to make a television series out of the groundbreaking video game Myst. The developers of Myst, Rand and Robyn Miller, are also discussing creating a companion video game for the series.

Myst is a puzzle game about opening a book and, through its pages, being whisked off to a mysterious island. By solving puzzles that require interaction with the environment, the player finds other books, which are portals to other places, and discovers the story of Atrus, the architect of these mysterious worlds.

The world of Myst offered almost no backstory, involved recursive puzzles like requiring players to travel through one world to move an object that solved a puzzle in another, completely different world, and had one of the trippiest endings of any video game at the time.

The game had no points system, no guns, and no complex mechanics of any kind. You pointed at where you wanted to go and manipulated objects—that was it. The game was brilliant, one of the true landmarks in the development of video games as an art form.

Myst is also one of two games—the other being Wing Commander III—that had a huge influence on adoption of the CD-ROM game format. Myst offered such a rich world, with the closest thing to photorealism at the time, that traditional methods of software delivery simply could not handle what it had to offer.

The game is ripe for a film/television adaptation, even more so than Dead Rising, Warcraft, and Mass Effect, which are three other video game IPs for which Legendary Entertainment is developing projects. Myst might offer the most creative freedom as far as adaptation is concerned.

Legendary Entertainment has not announced a timeline for the Myst television series, nor have they announced whether it will be distributed digitally or through more traditional platforms.

H/T The Verge | Screengrab via jakesteven1980/YouTube