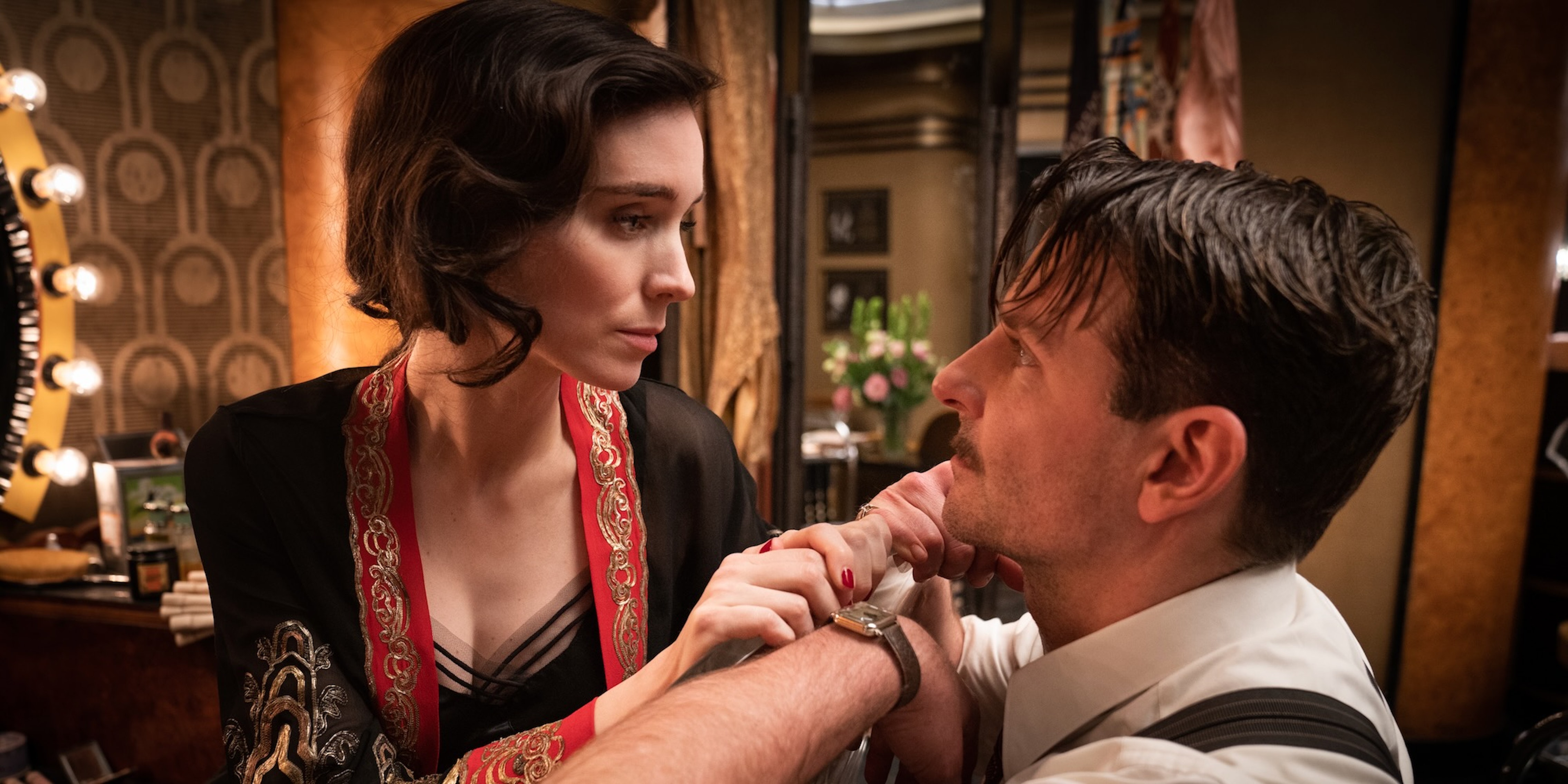 “Folks’ll pay good money to make themselves feel better,” Clem Hoatley (Willem Dafoe), the manager of a traveling carnival, says early into Nightmare Alley. He’s referring to his carnival’s geek show, an attraction that involves a man biting off the heads of chickens, an act that disgusts the audience even as they refuse to look away. Apart from illustrating how someone down on their luck can be taken advantage of in a cruel world—a process that Hoatley will soon detail for the hustler Stanton Carlisle (Bradley Cooper)— it’s also a variation of a thread that director Guillermo del Toro has woven into many of his films such as Pan’s Labyrinth and The Shape of Water: Even in stories that might center around the supernatural or outcast heroes, it’s men who are the real monsters.

RELEASE DATE: Dec. 17, 2021
DIRECTOR: Guillermo del Toro
STREAMING: HBO Max, Hulu
Set on the eve of World War II, a man joins a traveling carnival and picks up some tricks from a washed up mentalist before using those skills to swindle the rich. Based on a 1946 novel that was already adapted to the screen once before, it’s another solid entry from Guillermo del Toro, but it drags in its first half and its muted cinematography makes aspects of its noir aesthetic falter.

Nightmare Alley, which is based on the 1946 novel by William Lindsay Gresham, already has a big shadow looming over it. Not only is it del Toro’s first film since The Shape of Water won best picture, but there’s also a 1947 adaptation of Gresham’s novel that’s already a film noir staple. At times, Nightmare Alley’s visuals are stunning and lush, its impeccable production design going even further to sell us on the noir; other times—occasionally in the same scene—the scenes are flat, the characters so poorly lit they looked washed out, and the cinematography isn’t helping. The script by del Toro and Kim Morgan lags in places, and not every choice works. But an all-star cast—Cooper and Cate Blanchett are particular highlights—and a tense score from Nathan Johnson helps bolster its weaker parts.

At first, Nightmare Alley drifts, just like Stanton Carlisle. He’s leaving one life behind only to join a traveling carnival that offers Carlisle a job, one that he’s told is temporary; it’s not long before he more or less becomes part of the family. He’s taken under the wing of the carnival’s clairvoyant Zeena Krumbein (Toni Collette) and her alcoholic husband Pete (a heartbreaking David Strathairn), who perform a stage act in which Pete feeds Zeena information that the audience provides for her. Their act works so well because they’ve perfected a way of communicating mixed with some guesswork—something that Stan witnesses for himself as Pete can read him like an open book. But Zeena and Pete also have a moral code that’s helped them along the way: Don’t rely on “spook shows” (aka pretending that you’re actually conversing with the dead) to keep your audience in because somebody always gets hurt.

The first half of Nightmare Alley, which is largely set within that circus, is often more visually dazzling. Every nook and cranny is filled with detail, from a jarred baby we’re told is named Enoch whose oversized eye in the center of his seems to follow Stan everywhere (despite the lack of an iris) to the artifice of the different acts. It’s a vast contrast to the cold and austere rooms that make up the latter half of the film. Even as the world prepares for another war—Nightmare Alley is set on the cusp of World War II—the characters are mostly indifferent; remarking upon Adolf Hitler’s invasion of Poland, one character only asks if that’s the guy with the Charlie Chaplin mustache.

Nightmare Alley can feel like it’s dragging a bit early on, even as it scratches all of del Toro’s usual idiosyncrasies. It’s not until Stan and Molly Cahill (Rooney Mara), a fellow carny whose act involves absorbing electricity, leave the carnival and start to perform a mentalist act that relies on Zeena and Pete’s old tricks where things pick up, largely thanks to the arrival of Dr. Lilith Ritter (Blanchett), a psychologist initially intent on exposing Stan’s act. Blanchett embraces all of the airs of film noir’s femme fatale with aplomb with a grand and dramatic entrance as she pushes and prods Stan as they plan to pull one over on an old judge and a tycoon (Richard Jenkins) with the help of information Lilith obtained from therapy sessions; when Molly disapproves, Stan pushes forward on his own.

Nightmare Alley can feel like a couple of different disjointed movies in which the throughline doesn’t always connect, even as Cooper’s transformation from the first scene to his last is so set in stone (complete with characters to over-explain it along the way) that it reels us in even with some odd choices that leave you cold. Stan is a man never content with whatever he’s managed to obtain and buzzing with desperation, someone with no issue burning everything—both figuratively and literally, as we see in Nightmare Alley’s opening scene—down to the ground if it gets in his way, even if it means he’ll eventually dig his own grave. The carnival that took him in? Molly? It’s all just fodder.

Does Nightmare Alley’s final haunting moments, which will stay with you long after the credits roll, justify the mixed bag that comes before it? It’s hard to say. But del Toro is consistently among Hollywood’s most interesting directors no matter what he gets his hands on, and even when his big swings don’t quite work, there’s still plenty to offer.

Nightmare Alley is now streaming on HBO Max and Hulu.