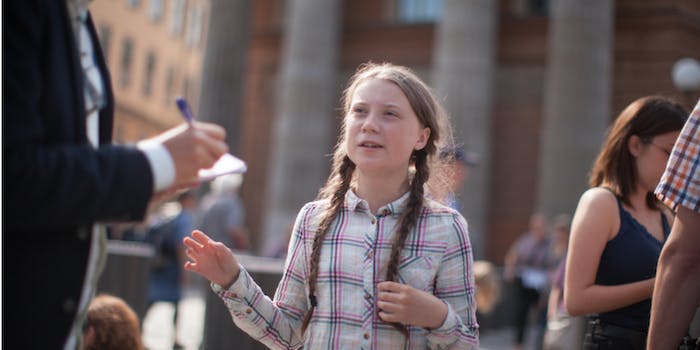 Hulu’s ‘I Am Greta’ will make you mad

The film only scratches the surface of the hateful comments the teen climate activist has endured.

Greta Thunberg trolled Donald Trump after Election Day with his own tweet, a moment of great catharsis for anyone who’s been following the 17-year-old Swedish climate activist’s journey over the last two years—including the vitriol directed at her from world leaders and misogynistic pundits. Nathan Grossman’s documentary I Am Greta provides a little more backstory to how she got there.

Featured Video Hide
I Am Greta

It begins just before another election: The opening scene shows Thunberg, then 15, sitting alone on the street outside Swedish Parliament, ditching school to advocate for climate awareness. Sweden’s general election is about to take place, but climate change is still not being taken seriously, and Thunberg is singularly focused on waking people up. An older woman approaches her and tells her she should be in school; when she doesn’t get the response she’s looking for, the woman waves Thunberg off with a dismissive “Meh.”

This scene illuminates a bigger theme in I Am Greta: Thunberg, who has Asperger’s syndrome, wants people to take climate change seriously, but doesn’t necessarily want to be a celebrity. Small talk, she says, is uncomfortable for her. But by simply following Thunberg to events she’s increasingly invited to speak at, like the United Nations Climate Change Conference in 2018, Grossman captures the grinning hypocrisy of those who actually have the power to do something about the environment, but treat Thunberg’s activism as more of a novelty. Is it good or bad to feel so let down by those in power at such a young age? As Thunberg’s profile grows, we’re shown clips of Vladimir Putin criticizing her, and Jair Bolsonaro calling her a “brat.” Grossman spends a lot of time letting the camera linger on her face, but Thunberg’s not an easy read.

More importantly, Grossman was given intimate access to Thunberg and her father, Svante, who travels with her and keeps her on track, urging her to eat when she gets too focused. In a voiceover, Thunberg says she was energy-conscious even as a child but didn’t have many friends. She relates that a film she watched in school about climate change affected her so deeply she stopped eating and talking to people. This gives more context to Thunberg’s vow to “be a pain in the ass,” but the most engaging aspect of the film is the relationship between Svante and Greta, the quiet, uncertain moments they share. However, her mother and younger sister are kept mostly out of focus, so we don’t see a true family portrait.

I Am Greta shows how Thunberg has become the popular kid, but in a much different capacity. She’s still a teenager, no doubt dealing with the insecurity that comes with that. In one scene, she worries people are “tired” of her. Elsewhere, her worried father meets up with a security expert after she starts getting death threats. The film only scratches the surface of the horrific and hateful comments she’s endured, for simply trying to get people to care about the dying planet. While it ends on a more uplifting note, it’s still a damning document of inaction. As a passive viewer, does that extend to us?