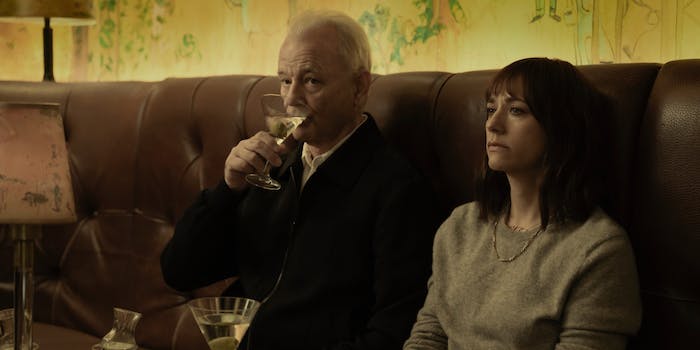 Featured Video Hide
On The Rocks

RELEASE DATE: Oct. 23, 2020
DIRECTOR: Sofia Coppola
STREAMING: Apple TV+
A married writer and mother of two teams up with her larger-than-life father to secretly spy on her husband, who she suspects is having an affair with a younger co-worker.
Advertisement Hide

While Murray has certainly had some stinkers in his decades-long career, On The Rocks isn’t one of them. Sofia Coppola’s latest film (and her third collaboration with Murray) is largely set in a New York City that both feels inherently familiar and like a memory; you could easily spend hours watching the comedic duo of Murray and Rashida Jones as they take on the town. There is certainly plenty of that as On The Rocks flirts with hijinks and wit, but it also takes on a more thoughtful note as it examines their own relationships on the cusp of a milestone.

The nostalgia surrounding Coppola’s New York, like pretty much any movie that has any kind of crowd scene released this year, is partially unintentional; thanks to the pandemic, the New York that Laura (Jones) and her father Felix (Murray) galavant around is downright enviable right now. It’s a very specific kind of New York and a very specific kind of life for Laura. She’s the kind of woman who wears a Paris Review shirt, carries a Strand Books tote bag, and has a Bernie 2016 sticker on her apartment door. She can dress up for a party or a date, but most of the time, she’d rather wear something more no-nonsense. She and her husband Dean (Marlon Wayans) are comfortable with each other.

After a brief prologue, we’re introduced to a Laura who’s about to turn 40 and seems to have hit a wall. Sure, she’s happy for the most part. She got a big advance on a book she’s writing, but now that she finally has time to write during the day (versus at night, as she did before) and her eldest daughter is old enough to be in school every day, she’s getting a major case of writer’s block. And while she’d probably call her marriage a happy one, the seeds of doubt are planted one night after Dean comes home late from a business trip and, for a split-second, seems to think he’s kissing someone other than his wife; he appears a little startled when he realizes it’s his wife.

Is that due to the exhaustion that comes with a business trip, or is Dean up to something? For his part, Wayans’ performance doesn’t tip the scales one way or the other; he’s presented as someone who can seem both upstanding and aloof, so we’re left just as confounded as Laura.

If Laura were left to her own devices, she might be able to write it off as an odd moment and nothing more. But after meeting Dean’s younger assistant Fiona (Jessica Henwick) at one of Dean’s work functions and Felix’s arrival in New York, the wheels start to turn in her head.

Murray exudes suaveness with every muscle as Felix, who’s definitely bolstered by Murray’s own eccentric celebrity persona. Felix is a very specific kind of an asshole (who definitely knows that he’s an asshole) that people love to spend a few hours with because he’s easily the life of the party; as a grandfather, he’s a delight. By now, Laura is well-used to her father rolling up in his own car with little to no warning—he’s an art collector with some clients in town—and putting the charm offensive onto practically every woman he encounters along the way. Its effectiveness depends on the woman he talks to, but if it came from anyone else, it would be undeniably creepy.

Felix is the kind of man who doesn’t hesitate to tell Laura that her husband is cheating on her; men straying from monogomy, he says, is within man’s nature. He says it matter-of-factly, as though there’s no room for debate, spending much of On The Rocks spouting off similar factoids about men and women with the kind of cool confidence that comes with a man who’s never been questioned about his worldview. Before we even meet Felix, we hear his voice telling a young Laura, “You’re mine until you get married. Then you’re still mine,” a small hint of Felix’s baggage that will soon unravel.

It doesn’t take much for Felix to get Laura to join him in on the elaborate snooping as it pivots into a high screwball comedy. Not all of it works—a confrontation with police in which Felix charms his way out of a ticket and arrest by male cops by claiming he knows one officer’s father feels particularly tone-deaf right now—and whenever On The Rocks tries to expand its worldview beyond Laura and Felix, it loses its momentum.

When Coppola focuses on Laura, Felix, and the growing tension and melancholy that develops between them, it shines. Jones can keep up with Murray while Coppola’s script gives them both moments of reflection or melancholy as they look back on their choices; even at their most ridiculous, you know exactly where they’re coming from. It’s just as fun to watch them butt heads as it is to watch them team up, and despite its shortcomings, On The Rocks delivers for its leading stars.

On The Rocks is now streaming on Apple TV+.