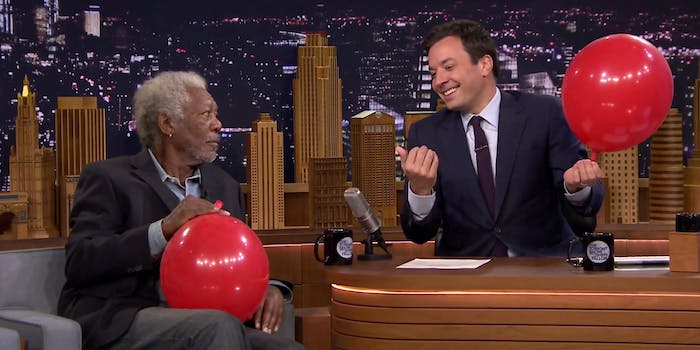 What’s better than Morgan Freeman on helium? A high-pitched interview with him and Jimmy Fallon

What does one of the most recognizable voices in the world sound like on a helium?

By now, it’s surprising Nicolas Cage hasn’t tried to kidnap Morgan Freeman, given that his voice is a national treasure.

In a clip of his new Science Channel show, Through the Wormhole, Freeman trade in his rich timbers in exchange for the helium soaked chipmunk squeaks. But how can Americans expect to be satiated with only a 30 second clip of  him talking about science in a high-pitched voice?!

Last night, Freeman joined Jimmy Fallon to promote his new Cosmos rival program and correct Fallon on a few title errors (It’s Through the Wormhole with Morgan Freeman). Yet, no press on The Tonight Show comes free. If you want your plug, you have to pay Fallon in wild antics or silly games. He named his price early, asking Freeman to conduct an interview on helium.

Morgan begrudgingly obliged, and we can’t say we’re not delighted with the results and his new nickname, Captain Morgan.