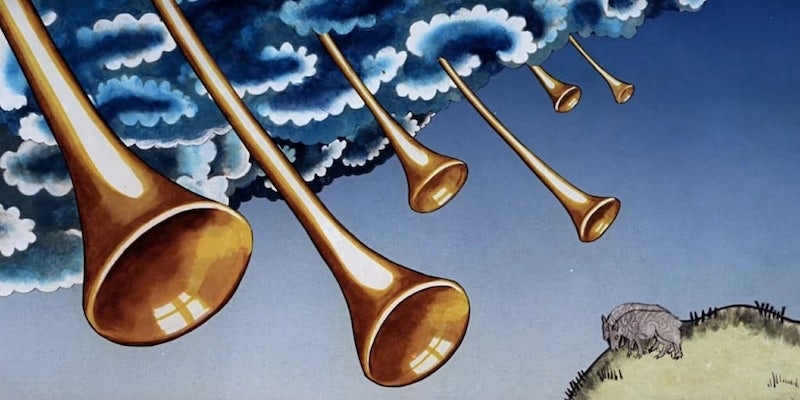 Celebrate the 40th anniversary of the theatrical re-release of 'Monty Python and the Holy Grail.'

Celebrating the 40th anniversary of the theatrical re-release of Monty Python and the Holy Grail, Terry Gilliam has released a full 14 minutes of deleted animations from the classic comedy.

Gilliam himself narrates the video of never-before-seen footage, describing his creative process and what influenced him to create certain animations. There are cut scenes from “The Tale of Sir Robin,” “Elephant & Castle,” “Run Away!” and “The Tale of Sir Lancelot,” to name a few.

On Oct. 27, a standard Blu-ray/DVD, plus a limited-edition gift set will be released. Both versions will include bonus footage of the Holy Grail Q&A event from the 2015 Tribeca Film Festival and more new artwork from Gilliam.

RELATED: From coconuts to crosses: The stars of ‘Galavant’ love their Monty Python

Those that opt for the gift set will also be able to fawn over exclusive letters from co-directors Giliam and Jones, outtakes and extended deleted scenes, plus catch the educational film, “How to Use Your Coconuts.”

However, the box itself might be the coolest part. Shaped like a castle, it comes with a fully functional catapult that launches rubber farm animals, which are also provided. If it seems impossible to wait another day to re-enact one of the funniest scenes in the film, the box set is available for pre-order on Amazon.

In collaboration with Rainbow Releasing, Sony will also be releasing the cult classic in theaters all over America. Exact locations and times are yet to be announced.