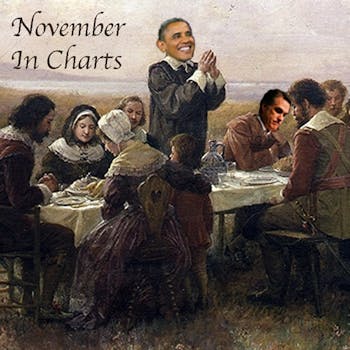 The month in charts: November

Still recovering from their Thanksgiving food comas, the guys from I Love Charts bring you the month of November, charted.

Still recovering from their Thanksgiving food comas, the guys from I Love Charts bring you the month of November, charted.

Every four years, people all across America gather together for a ritual rich in metaphor for the American experience. From all walks of life, citizens join ranks with their brothers and sisters to stand in line, battling outdated technology and undisguised voter suppression tactics for the privilege of casting their vote for President of the United States. From their homes, jobs, schools, posts they come and wait. And wait, and wait, and wait …

And so it was that the nation elected Barack Obama for a second term as President. It was generally a great day for progressives in America, but one group in particular had a lot to celebrate: stoners.Marijuana legalization referenda (that’s full-on legal pot smoking, no doctor’s note required) won out in Colorado and Washington — and in Massachusetts, an initiative passed legalizing medical use. Unfortunately, the high was short lived — tragedy by way of Twinkies struck the stoner community soon after.

November may be a month marked by the growth of impressive facial hair, but alas not all such growth is part of the annual celebration. As the National Hockey League’s lockout  approaches its 80th day, some players (and fans) have been sticking to their promise to grow “lockout beards” until the action gets back underway. How long is 80 days? Last year’s NHL playoffs covered just 60.

No Peace in the Middle East

Labor disputes in the NHL seem to be an annual occurrence, but when it comes to recurring conflict, there is one unfortunate standard-bearer.

In lighter recurrent news — you know, the type we focus on so that we can ignore the real problems — we have, shock, another sex scandal!  General David Petraeus was caught philandering with his biographer and resigned as director of the CIA. His mistress, Paula Broadwell, is the author of … yes… All In: The Education of General David Petraeus. I see what she did there.

What the Hell Is the Fiscal Cliff?

Sex scandals we understand. But the economy? All we know is that we may or may not be approaching a dreaded “fiscal cliff” that may or may not do things to money that will make it bad for … economy, mortgage, bonds, credit default swap, securities, gold, Adam Smith. We have no idea what is happening, but thankfully neither does anybody else.

Giving Thanks for Gluttony

Not all was gloom and doom in November because, Thanksgiving! Oh, the joy of food.

See you in December!