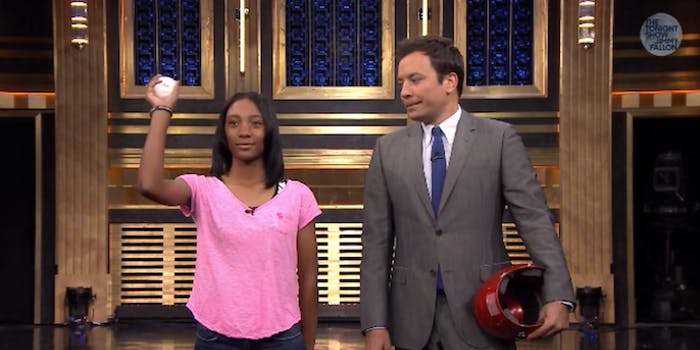 Watch Mo’ne Davis strike out Jimmy Fallon like a boss

Don't we all want to throw a wiffle ball at Jimmy Fallon?

If you don’t know Mo’ne Davis yet, chances are you will soon. The 13-year-old Little League World Series pitcher is a rising star and has a fierce fastball. Last night, she threw one at Jimmy Fallon.

For the sake of safety, they used wiffle balls instead, but she still slid several pitches across the plate with ease, effectively striking Fallon out. Is it wrong that we got a little excited when she hit him with a ball at the end?

Though Davis seemed a bit shy during her interview, confidence isn’t an issue for the Philly teen. When asked by ESPN if there’s a major leaguer she pitches like, she responded, “I throw my curveball like Clayton Kershaw’s and my fastball like Mo’ne Davis.”